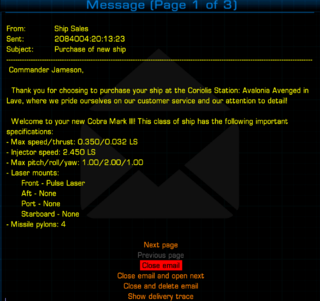 For a long time Oolite players have been receiving mission screens that array themselves as an email message. This makes sense in-game, as you would imagine a lot of communication between the player and NPC's in the game world would take place inside the bounds of an email system. However, while the conceit of an email system has been present, many other aspects of a true email system are lacking. In particular:

The Email System OXP attempts to address these shortcomings and provide (as much as possible) a true, in-game email system. After installing the OXP, you will begin to receive emails from various GalCop departments, confirming various actions that have taken place. For instance, after destroying a ship with a bounty, you will receive an email from "GalCop Bounty Processing" confirming the kill and how much bounty was paid.

The OXP adds a new option on the "Interfaces" (F4) screen called "Email system". The number of unread emails will be displayed here.

After opening the email system, the player will see their inbox, sorted with the most recently received email at the top. The inbox view shows the senders name or email address, the date the email was sent, and the subject line of the email. A "!" symbol beside the email indicates it is unread.

At the bottom of the screen are the functions the player can select. They are:

To open an email, use the up and down arrow keys to move the highlight bar to the desired email and press enter. Opening an email will automatically flag it as read.

When an email is opened, at the top of the screen will be the senders name or email address, the date the email was sent, and the subject line of the email.

At the bottom of the screen are functions the player can perform on this email. They are:

Some emails can require the player to make a response. When an email requires a response, there will be additional options below the "Show trace" option. The format of these options will be "Send 'option' response." For instance, an email could ask the player "Do you want to join our team?". In this case the options might be:

The player can select either of these options and press enter to send the response.

When an email has previously had a response sent, additional text will be added to the email body, similar to an email trail. Continuing the example above, if the player has response "Yes", the email display might end up looking like this:

Her Majesty is in need of your assistance. Thargoid incursions are on
the increase, and we need your help in the battle. Would you be willing
to join us in the fight against this rising tide of evil?

Commander Curruthurs, it would be an honour.

Other OXP's can make use of the email system by calling the $createEmail function.

The Response options have the following format: Required fields:

In its most simplest form, sending an email is done with the following code. In this example, an email is sent from "Caption Solo", with the subject line of "I've got a bad feeling about this". The current time is used as the date the email was sent, and the body of the message is "I thought they smelled bad on the outside.".

A more complex example is below. In this example there is an expiry time set, 2 minutes and 30 seconds from now. Because the "expiryText" option is set, the email will remain in the inbox, but will change to an "expired" state. There are three options on this email, the first two are available while the email is current. If the email expires, the third option will be displayed and the first two will be hidden. This is controlled through the "expiryOptions" parameter.

See the readme file in the installation package for more examples.

For a simple example (adding an e-mail into Maintenance TuneUp.oxp see here (2019))

Place the 'EmailSystem.oxz' into your 'AddOns' folder and when you start the game, hold down 'Shift' until you see the spinning Cobra.
Alternatively, you can download the expansion using the expansion pack manager in the game itself.

Note: If using v1.20 of Deepspace Ships, ensure the "oolite-font.plist" file, located in the "Config" folder of the OXP, is removed or renamed. This custom font is incompatible with the current version of Oolite, and the Email System in particular. Version 1.21 should work fine.

This work is licensed under the Creative Commons Attribution-Noncommercial-Share Alike 4.0 International License. To view a copy of this license, visit http://creativecommons.org/licenses/by-nc-sa/4.0/ or send a letter to Creative Commons, 171 Second Street, Suite 300, San Francisco, California, 94105, USA.
The expansion pack was developed by phkb.

Big thanks go to Wildeblood who pushed me not to compromise on functionality. Thanks to Norby who is always willing to contribute valuable ideas to any project. Thanks to Disembodied for some wonderful suggestions on new parts of the system. And huge thanks to cim, who is an amazing help with any and all technical questions relating to Oolite.