Multi-billionaire and FurCorp heiress Magda DeMug first dabbled in commercial enterprises founding CoachWhip Inc. Her fleet of CoachWhip luxury liners provide a first class transport service to well-heeled business executives, VIPs and anyone else who can afford the 5,000 Cr ticket price. Having established a profitable enterprise fleecing the idle rich, the heiress turned her acute feline business mind to the question of sucking credits from the pockets of the proletariat.

The basic hull of the CoachWhip liner was completely stripped, removing the cargo bay, hyperspace drive and inter-system drive. A docking port was added and the internal structure re-fitted as a luxurious Casino. The platforms were then deployed in geo-stationary orbit near the main GalCop Station in technologically advanced systems throughout the eight galaxies. Thus was the Chain of HOopy Casinos born. These dens of inequity are found in systems with a Tech Level of 11 or more. In such a system, setting an Advanced Space Compass to C will locate the nearest HOopy Casino.

Commanders who chose to dock with a HOopy Casino are quickly ushered into the vast gaming halls, here to be offered the opportunity to win or lose credits in games of chance.

Some Commanders never leave the casino area of the station, claiming that they have a system to ‘beat the hoops’. These doomed lost souls can often be seen wagering their Credits, ship, left kidney or spouse on just one more throw of the hoops. 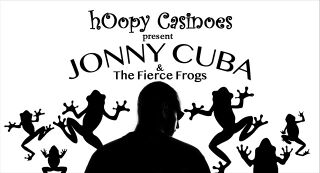 Promotion of the one and only musical act to be experienced at any hOopy Casino.

Commanders of a more level-headed nature visit HOopy Casinos for the purpose of trading. Those who can resist the charms of the complementary drinks and scantily clad croupiers available in the main casino area of the orbital platform may engage in trading on the Station’s commodity market. The Casinos often have a surplus or deficient of certain goods and thus a canny trader can sometimes make more profit by off-loading or purchasing his cargo at the Casino rather than the system’s GalCop station.

The Casino is protected by a reasonably strong shield, although it carries no weapons. The Casino Managment rely on the fact that the casino closely orbits the GalCop Station, which will launch Vipers to defend the orbital platform from attack. Additionally a small fleet of Security Sidewinders in HOopy livery are stationed aboard to defend the Casino if need be.

The eerie music that makes one's stay at a HOopy Casino seem like an absurd, unending dream, is perpetually performed by the holograms of Jonny Cuba & The Fierce Frogs.

The Planetfall OXP has an addon OXP placing HOopy Casinos on the planet surface.