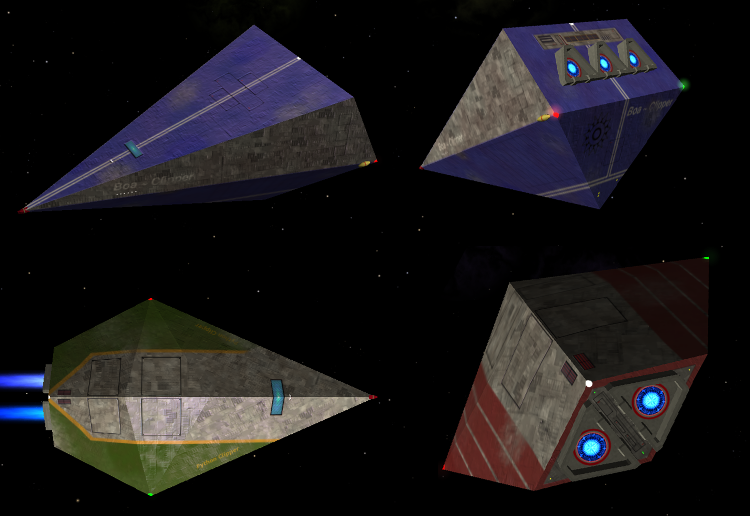 Inspired by the great Clipper ships of Old Earth's 19th Century the Boa II Clipper was developed by the Gerege Federation Space Works as a result of extensive market research carried out for them by respected pollsters Moori. The research indicated that there was an un-filled niche in the market for a very fast combat-capable transport, a ship capable of covering great distances comfortably, safely, but most of all, quickly.

To keep development time and costs down it was decided to adapt the proven hull of the Boa Class Cruiser, rather than design a new ship from scratch. As the Boa CC was strong, capacious, and very manoeuvrable, little needed to be done other than increase the engine power. By enlarging the engine room they were able to shoe-horn in a third Stardrive, thus giving the Clipper an immediate 50% power increase over the Class Cruiser, and a top speed of a highly creditable 0.362 LM. The trade-off is a 25 ton reduction in cargo space, but the remaining 150 tons capacity was considered more than adequate.

Following the success of their Clipper upgrade to the Boa 2, the Gerege Federation SpaceWorks felt that a similar upgrade to a smaller freighter would also be worthwhile. Following negotiations with Whatt and Pritney, they obtained a licence to adapt Python hulls to 'Clipper' specification.

Both Python and Boa Clippers have sacrificed some cargo space to allow fitment of extra drive units allowing higher top speeds. GFS favour the DeClapton and Layla Quark-scintillation StarDrive as these units are powerful yet compact and are extremely reliable.

In keeping with their role as long distance express transports, both Clipper models are equipped as standard with Fuel Scoops and Heat Shielding to allow 'sunskimming', and with the introduction of the Python variant external secondary fuel tanks were introduced across the range. These hold 3LY of fuel and this can be moved into the main tanks when they are empty.

These ships have custom HUDs, with a clear logical layout optimised for combat situations.

If an NPC is severely damaged in battle and the pilot ejects the ship will progressively become derelict. The ship loses power and the navigation strobes will stop, the lights fade, followed by the engine glow, and finally the derelict is left gently tumbling in space.

The Python Clipper has two Drive units with a reduction in cargo capacity of 25TC over the original Python, leaving a hold of 75TC capacity. The original Python was also noted for its lack of modern equipment options and poor armaments and these issues have been addressed in the Clipper. The Python Clipper has one less energy bank than the original Python (six rather than seven) and no cargo expansion option, but the space freed-up has allowed much more powerful rechargers to be fitted and also allows for four missile pylons, double that of the Python. Military Shield Boosters can also be fitted to the Clipper. Performance, handling and top speed are all noticeably better than a standard Python.

The Boa Clipper has three Stardrives and a cargo capacity of 150TC. Top speed and handling is improved over the Boa 2 but all other specifications are the same, with a full range of equipment options available and eight energy banks with efficient rechargers already included. Since its introduction, the Boa Clipper has sold over 850 units, making it Gerege Federation Space Works most successful model ever.

This OXP is compatible with ExtraFuelTanks OXP. Both OXPs can be installed together. If you fly a Boa or Python Clipper with External Fuel Tanks you will not see ExtraFuelTanks offered, but if you have several Commanders flying various ships and use ExtraFuelTanks these will continue to work normally.

Many thanks to Griff for allowing me to 'borrow' the engine model from his 'Boa'.

This work is licensed under the Creative Commons Attribution-Noncommercial-Share Alike 3.0Unported License. To view a copy of this license, visit http://creativecommons.org/licenses/by-nc-sa/4.0/ or send a letter to Creative Commons, 171 Second Street, Suite 300, San Francisco, California, 94105, USA.

Version 1.4.3 Released 31st May, 2015. Bugfix to correct mis-named sub-entity key which was causing the OXP not to load.

The latest OXZ can be downloaded/installed via the Expansions Manager. To install the OXP version, unzip the download and place the .oxp folder in your Oolite AddOns folder. Please note that this is an older version, and that the current OXZ is recommended.