The MFD will automatically classify any object added by an OXZ as a ship, station, missile, mine, asteroid and so on as appropriate. Planets, Moons and Gas Giants will also be automatically classified. For natural objects (planets, moons, gas giants and asteroids) the MFD will provide information on the object’s composition. For ships, stations, missiles and mines the MFD will provide information on the company or manufacturer of the ship or weapons system. 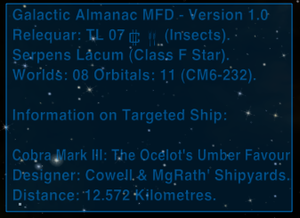 The Default format for Ships, Stations, Missiles and Mines is the Designer and name of the Designer.

The MFD Unit provides information in the format:

If no Script Key is specified, then the Object Type will be Ship or Station and the Object Data Name will be Designer. Planets, Moons, Gas Giants and Ice Giants will be automatically classified by the Galactic Almanac OXZ. If the Ship or Station is a new one, not included in the Data Base, the Designer will be listed as "No Data Available." If you would like your ship or station to be given a listed designer, you can specify the name of the designer by setting the Object Details with a Script Info Key in Ship Data by setting the script info command for object details as shown below:

The MFD will then list the Designer of your ship, station or weapon as "My Custom Company". All three words the MFD displays can be custom set in Ship Data if you wish. For example, if you wished to over-write the defaults, so that your ship appeared on the MFD as "Information on Targeted UFO. Caution: Alien Vessel", set the script info to:

There is no requirement to set any script info commands when designing a new ship or station. The MFD Unit will automatically classify the object if no script info is present. If the object is a new type of ship or station released after the Galactic Almanac OXZ, the Designer will be shown as "No Data Available" if no Designer has been specified in script info using the almanac_mfd_object_details script command in the object's Ship Data entry.

Normally all objects with a beacon will be listed on the "Galactic Almanac of GAL-ID Registered Orbitals and Stations" page. The Galactic Almanac OXZ contains an exclude list which automatically excludes certain objects with beacons (mission ships and secret stations) added by other OXZs up to the latest release of the Galactic Almanac. If you are adding a beacon to a ship, station or other object but do not want it to appear on the list of Registered Orbitals, then you can add your object to the exclude list by setting the hidden option to On as shown below:-

Please note however, that if you have given an object a beacon in Ship Data then it will still be detectable with the native Advanced Space Compass, even though it is not listed by the Almanac.

If you are adding a new station to the game and you want it to be named by the Galactic Almanac OXZ then you do not need to do anything as the Galactic Almanac will name it automatically. By default the Almanac will add a name after the display name of the station. If it also has a beacon it will add it to the list of stations for the system appearing on the F4 screen when docked and on the MFD whilst in flight. For example if the display name is "My Special Station" the Almanac will add a unique and persistent name and your station will appear as "My Special Station: Seattle Depot". If however you do not wish the Galactic Almanac to name your station, either because it is a unique station or you are giving it your own custom name then you can turn off the automatic naming feature as shown below:-