RRS Group operations are based around Waystations, positioned near the major system spacelanes. Buoys on the spacelanes direct needy pilots without an Advanced Space Compass (or whose compass has been damaged) towards the stations.

The two wings of the Waystation house hangars, repair shops, hospitals, and accommodation for the RRS pilots, engineers and medical staff based there. The station's leisurely rotation provides reasonable artificial gravity in the outer wings, while also allowing for low-gravity operations in the inner wings. 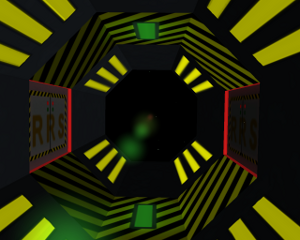 The central spine of the station is mostly hollow, and contains the large docking and launch corridors. Even Anaconda pilots will have a relaxing time docking for once, as the docking bay is over 200m wide, and has a set of beacons positioned in front of it to ease docking for ships with damaged computers or thrusters. Crashes on docking - despite the extremely damaged state some ships are in - are very rare.

For additional safety, launch and docking occur from opposite sides of the docking corridor, reducing the chance of collisions in emergencies.

Once inside the docking corridor, ships are magnetically slowed to a complete stop, before being shunted into a service bay in the station wings. RRS repair and shipyard facilities are fully-equipped to service almost all common ship equipment, though to encourage pilots to go elsewhere except in emergencies and so keep the shipyards clear for RRS business, there is a substantial premium for this work.

Waystations usually have a few escort fighters and contractors docked between missions, but generally rely on their shields and system police for protection. They are therefore generally found only in the safer systems.

Depending on their reputation, Commanders may be able to find a range of contract offers at the way station, and those with a strong record of service to RRS will be given additional privileges.