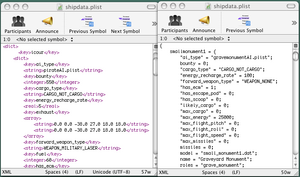 the plist formats, XML and OpenStep

A property list, or plist for short, is data structured in a standardized way, used by Oolite for a wide variety of configuration files. The concept originates with OpenStep, the specification on which the Cocoa and GNUstep programming libraries Oolite uses are based.

A property list is an abstract structure which can be represented files using at least five different formats. Since Oolite uses two different implementations of property list support, one on Mac OS X and another on other platforms, it can’t consistently read all these formats.

While the OpenStep format does not support all the data types used by Oolite – specifically, it does not support integers, reals or booleans – Oolite can in most cases automatically convert strings to these types starting with Oolite 1.69. (If you find an exception, please report it.) As such, the types can be used interchangeably. In prior versions of Oolite, some types, especially booleans, could not be converted automatically, so XML format was required for some property lists.

The rest of this page describes the types of property list element used by Oolite, and how they are represented in OpenStep and XML format property lists. It does not cover all property list content types or file formats and is not a general-purpose reference to property lists.

A string is a block of text. In OpenStep format plists, this is surrounded by straight double quotation marks, with “\” being used to escape quotation marks within the string: "a string with a \"quotation\" and a <tag>". OpenStep format plists also allow single-word strings to be used without quotation marks when this is unambiguous. However, the definition of “unambiguous” differs between Mac OS X and GNUstep, so this usage is not recommended except for numbers. In XML format, it is surrounded by <string> tags, escaping contents with XML entities: <string>a string with a &quot;quotation&quot; and a &lt;tag&gt;</string>.

An integer is a whole number. In OpenStep format plists, an integer is a string whose contents happen to be digits (and optionally a minus sign), and may be unquoted: -12345. In XML format, it is surrounded by <integer> tags: <integer>-12345</integer>.

A real is a number with a fractional part. In OpenStep format plists, reals are again written as unquoted strings: 42.123. In XML format, reals are surrounded by <real> tags: <real>42.123</real>. Large reals can be expressed in scientific notation: 1.35e+20 means 1.35 × 1020. Integers and reals are mostly interchangeable in Oolite.

A boolean is either of the values true or false. In XML format, the tags <true/> and <false/> can be used. OpenStep format does not support booleans. However, as of Oolite 1.69, a number of different methods can be used to represent them: any of the strings "true", "yes" or "on" may be used to represent true, and any of the strings "false", "no" or "off" may be used to represent false. Also the uppercase variants of these keywords can be used as casing is ignored for these booleans. Additionally, the number 0 is interpreted as false and any other number as true (but see fuzzy boolean below). The recommended form is to use "yes" and "no" to keep a consistent syntax that is not confusing.

Previous versions of this page indicated that numbers could be used as booleans in OpenStep-format property lists in any version of Oolite. This is incorrect and such usage will not work with versions prior to 1.69.

A fuzzy boolean isn't really a property list type; rather, it's a special usage defined by Oolite. If a fuzzy boolean is expected, and a number is encountered, it is treated as a probability between 0 and 1. For instance, if a value of 0.5 is used, it will be treated as true half the time, and false the other half. Values other than numbers are treated like booleans.

Dictionaries are the most complex type. The consist of key/value pairs – each pair consists of a key, which is always a string, and a value, which can be any type, including other dictionaries. Each key must be unique, and the order of pairs is not significant.

In OpenStep format, dictionaries are contained in braces, with key and value separated by = signs and each pair followed by a semicolon: {length = 42; width = 36.5; "long name" = "this is a thing with a really quite long name"; attributes = (hairy, muscular);}.

In XML format, dictionaries are contained in <dict> tags, with keys specified by <key> tags and immediately followed by values with whatever tag is appropriate for the value type: <dict><key>length</key><integer>42</integer> <key>width><real>36.5</real> <key>long name</key><string>this is a thing with a really quite long name</string> <key>attributes</key><array><string>hairy</string><string>muscular</string></array></dict>.

Both formats can also contain comments, which are ignored by the program but are useful to human readers. In OpenStep format, these can either start with “//” and continue to the end of the line, or start with “/*” and end with “*/”. In XML, they start with “<!--” and end with “-->” (and must not contain “--” anywhere else in the comment).

XML plists also need a standard header, which looks like this:

The following is a shortened version of Oolite’s built-in equipment.plist, in both OpenStep and XML formats.

The round brackets are arrays in OpenStep, and are used to group information for a given key. Examples are the exhaust (if one has multiple ones for a given ship), the individual custom views and sub-entities...

One would recommend using a programmer-friendly editor like notepad++ or an equivalent. On N++ if you select an open or closing bracket (of whichever flavour) it will automatically highlight the other part of the pair and link them. It's useful for quickly checking that you have your pairs correct - a good habit to get into. And in many cases the kind of log error one sees is indicative of missing brackets. Those and missing quotes and semi-colons are arguably the three most common errors in openStep plists if one excludes typo's. Thargoid (2011)

Technically the XML plists are the best, but they are only fully supported on Mac systems. Without a plist editor, the plists are not as easy to read or write as OpenStep plists. However, those editors are only easily available for the Mac. Windows and Linux users will have to rely on text editors to edit those plists. Therefore it is advised to write everything in open step format.

Converting xml to open step can be done by a python script, written by Cdr. Jettison: download python conversion script ( xml plist must be free of comment for the script to work)

Note that this conversion script contains CR/LF (carriage return/linefeed) end-of-lines, as used on Windows computers. This will cause "bad interpreter: No such file or directory" errors if run on Linux. You can strip out the CR characters yourself, or download this copy of the script which has already had the CRs removed. (you will also need to make the script executable)