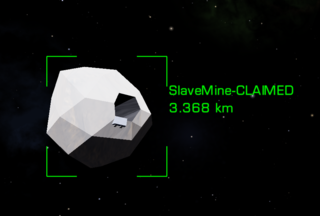 Introduces mines and mining into Oolite.

This OXP is currently broken, i.e. it does not work with the current release of Oolite. Reason: The relevant asteroids now dance the tarantella and seem unable to recognise the existence of food etc. (Release thread link).

Mines are placed in the system randomly for every new visit. Mines will persist in their locations when you save but only in the current system, allowing you to continue a search pattern (if that's your kind of thing). The exception to that is the mines which you have already taken over which will always be in the location you left them. They are placed centred around the sun within 1 wp->sun distance. Unclaimed mines will reveal their location to you as will the mines you own, the mines which are claimed by others may reveal their beacon to you or, more likely, you may notice a battle or explosion in deep space (keep an eye on your port and starboard views) which provides clues.

Beacons are not available immediately as a lightspeed delay is worked out, this is in order that the beacons are uploaded to the compass in the order that you receive them allowing you to know what status the mines are. Unclaimed mines are more likely in less stable governments, and is impossible by default in rich capitalists (but you may still intercept beacons).

Leave the mine too long and it may be taken over. Taking over mines is as simple as docking, although for claimed mines this will fall to random chance but if you don't have the requisite resources the AI will be grumpy with the possibility of powers spikes.

Mines require resources, 20t of food and 5t of slaves (standard) or 20t of machinery and 5t of computers, extras can be taken in the form of commodities which the human workers like increasing productivity but also increasing your likelihood of gaining a criminal record. Currently 5t Narcotics or 5t liquor will increase productivity or 5t of firearms will improve mine defence when you are away.

Asteroid claims can be destroyed by taking the station to low energy or taken over by docking. Management menus are in place, although my design is slightly shoddy as it sometimes requires two presses (because the previous menu still exists on the stack, I think). From the management menu you may view all of your owned mines and their stats. Galaxies are not yet taken into account. Mood music has been added.

It only gives gold (and probably too much) which will be available after at least one day of mining. I have released it under the same license as Oolite so contributions are open and you may use it within those terms (I don't really mind, but dropping me a note would be appreciated). There are other little bits and pieces, too.

Docking at a mine brings up a management menu

Too many stations, not enough? in Mining.oxp/Scripts/miningScript.js the lines "this.minMines" and "this.maxMines" are available for tweaking, but it doesn't check that max is greater than min so be careful.

Too much gold or required resources? Not enough?

Does this slow your machine down? (it shouldn't as it's mostly precalculated, destroying your own mine claims is possible and is processed ingame to allow for an immediate jump without introducing a bug, so if you have a slow machine you might like to try that)

Suggestions, contributions or hateful vitriol will be accepted in good humour. :P

"Some artists have multiple licenses listed. Does that mean you need apply the rules of all licenses or can we pick the one license we prefer? Submitted by bart on Thu, 07/08/2010 - 16:38

You must follow only one of the licenses. However, when you re-distribute/edit, you are encouraged to include/use all of the licenses, so the license spectrum (and thus sum of people/projects who can use the art) doesn't shrink."

Back in the early days, when only a handful of systems were known there were stories of long abandoned mines governed by artificial life forms. These stories were dismissed for the better part of a century until traders began pulling in more minerals than should be possible with a mining laser. Proctcorp, an early industrialist alliance now long since defeated in the corporation wars, began investigations. Their findings were nothing less than astonishing...

These mines do exist and they are controlled by beings who call themselves Heuristically Advanced Lifeforms. They were placed by an ancient race of humanoids, thought to be extinct now for millions of years. The AIs refer to these ancient people as their begatters and very little else is known of them. The intelligences which control the mines are capable of laying dormant for eons, keeping minimal current in their memory arrays from the light of the stars and by scooping miniscule amounts of hydrogen from the clouds which are dissipated throughout space for their fusion reactors. However, once a ship docks an infusion of power is taken and the AIs awake. If the ship is carrying the necessary resources it will remove them and set about to work, encoding it's beacon to the ship which provided for it. After some time, minerals are accumulated and upon returning to the mine the ship will receive these minerals in the hope of more resources and better quality life. It is unclear, however, why the AI destroys all resources and discharges it's power when threatened with destruction but it is probably a survival mechanism by way of offering the attacker the mining rights. The previous ship will lose all beacon codes and the chances of him finding the same mine again are slim to none.

All is not lost as these things are everywhere, usually within 1 witchpoint -> sun distance from the sun itself. Stealing other peoples claims, though easy once you've found the mine, is not recommended as miners have a tendency to be a bit mad or very drunk.

I'm not much of a writer so if you can do better, please get in touch.