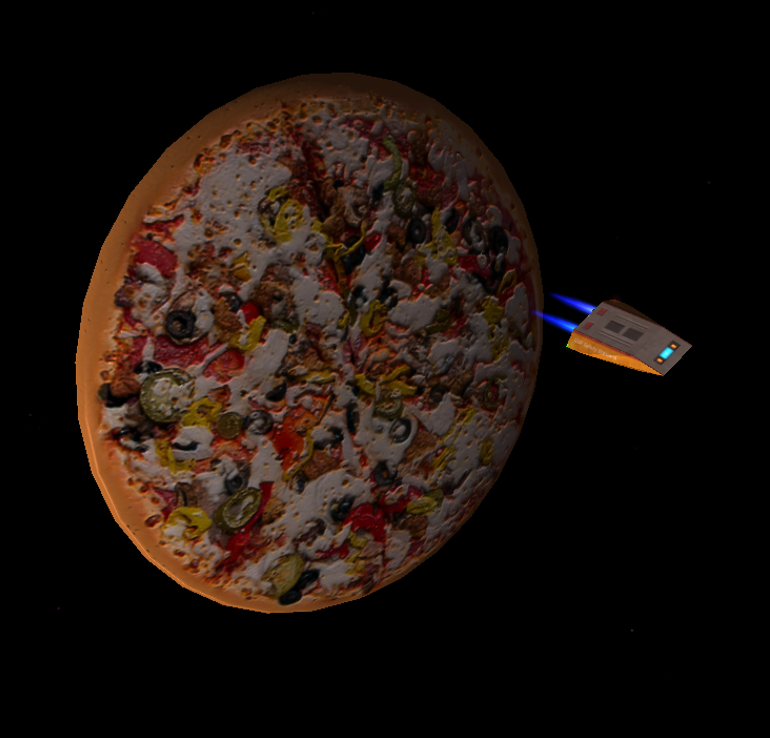 This OXP adds Giant Space Pizzas near to the Sun in thirteen systems spread through all eight Galaxies.

Pizza systems are marked on the short- and long-range charts with a yellow diamond, and the planet descriptions include mention of them. You will be reminded about the Pizza when you first dock at the main station.

You do not need to visit the main station at a Pizza System, and can fly directly to the Visitor Centre if you prefer. These have a 'V' space compass legend.

You can start visiting the Pizzas in whichever galaxy you are in, and they do not have to be visited in a set order - just visit them as part of your normal travels around the Eight.

Of course if you wanted to treat this as a 'Tour' mission and deliberately visit them all in a relatively short timescale you can do that as well.

Many hundreds of years ago the Trumbles had an advanced technological civilisation, but were suffering from acute over-population and food shortages. Due to the remote (and now forgotten) location of their homeworld they had no contact with other races, and were tied to their home-planet. While the Trumbles did have space travel their attempts to explore space were in their infancy, and their ships were crude.

They tried to solve their food shortages by bio-engineering fast-growing giant foodstuffs but these experiments were largely un-successful, and eventually ended in disaster. An accidental release of some genetically-modified blancmange left the Trumble homeworld un-inhabitable within a year and caused the Trumble Diaspora, a last desperate attempt to save the Trumble race by evacuating the planet and searching for a new home.

However most of the Diaspora ships were lost during the attempt, which marked the end of the Trumble civilisation. The few surviving Trumbles did eventually find a home in GalCop space where the indigenous species at first thought they were 'cute' and kept them as pets. The Trumbles started to re-populate, but having lost their knowledge base and without any functioning society, they were no more than a collection of individuals, and before long their runaway breeding even led to them being considered vermin by many of their adoptive hosts.

One of the lost Diaspora ships was the "Preewootre'ill". Against regulations a Trumble food scientist smuggled a small specimen of his work, a megapizza, on board just before she was launched. Unfortunately the pizza grew rapidly on board the ship and eventually caused its destruction while it was in witchspace, leaving hundreds of pieces of the megapizza scattering into interstellar space. Most of these were lost forever, but a few fell into stable orbits around some of the suns in GalCop space. Baked by the heat of the sun, they grew, and grew, and grew.

Today, they are known to the GalCop races simply as Giant Space Pizzas and at up to 5Km in diameter these inert and harmless entities are quite impressive. They remain there to this day, a curiosity to the spacefarers that come across them, and a testament to the folly of the Trumbles' catastrophic attempts to feed their burgeoning population all those years ago.

The Pizza model is by Shipbuilder and the model for the Visitor Centres is by Dr Nil. Many thanks to cim and Pleb for their assistance and Fatleaf for checking and testing. 'Musak' by the Ronnie Smith Band.

With the growing number of constores in the Ooniverse, the demand for pizzas has increased. So, the Riedpizza Co. bought some simple ships to deliver the many types and flavours of our awarded pizzas. We can also deliver other materials if you wish... just contact us by calling 00-pizza, and we will be glad to help you!

Version 1.0 - Release
Version 1.0.1 - In this version, included this readme file
version 1.0.2 - Fonts at the sides of the ship reduced a little, which made the reading a little better.
Version 1.0.3 - Introduced a small message to the player ships, a small pizza teaser. Thanks to Commander Commander McLane, whose script I was based on, Smivs and BuggyBY for helping with it.