Adds sizeable numbers of traders/pirates travelling in formation to your game.

Escort Formations adds 19 extra escort formations to the game, which will be used by traders and pirates, and can be used by other ships.

As this breaks up both trader and pirate formations, it can make it slightly more difficult to tell the difference between traders and pirates on the spacelane.

Escort Formations 1.1 is the latest version. Install to your AddOns folder in the usual way.

Only ships with a primary role of trader, pirate, hunter or police (from the core game) or bigTrader, liner, coachwhip or fuelship (from OXPs) will normally be affected by this OXP, and only those ships which are spawned with escorts. Ships which already have their own custom escort formation will not be affected, and some of the remaining eligible ships will keep the standard escort formation.

You can apply the escort formations defined by this OXP to your own ships with other roles by using the following functions: To assign a random offensive formation to a different ship, suited to its escort count

To assign a random defensive formation to a different ship, suited to its escort count

To assign a specific formation to a ship

25% of convoys keep the classic V-shape. About a third of the remainder will get "vform" which looks very similar to classic up to 4 escorts, though is distinguishable at 6.

formation is the name of the formation. The 19 formations available in version 1.1 are: 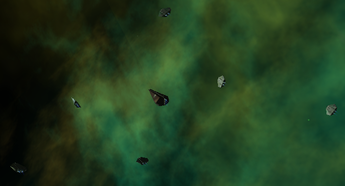 The Arrowhead formation provides heavy firepower on the initial attack

If an unrecognised formation name is given, "vform" will be applied, which is similar, though not identical, to the standard escort formation.

1.1: Add eight more formations, include some common OXP trader-like roles in the list.

Each of the above contain an update for this elderly OXP to include the newer AI's which came in with Oolite v.1.80