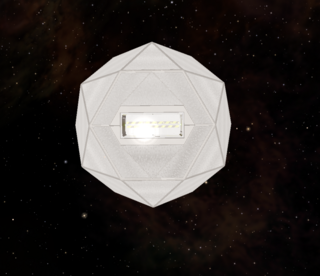 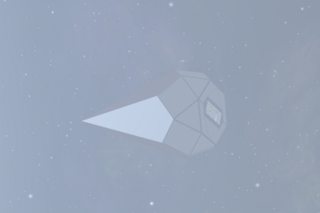 Side view (with solar glare)

Sunskimming as an activity with special equipment & stations.

This oxp is aimed at poor commanders who cannot afford much equipment (or who are heavily in debt).

First off: I wanted to create an in-system activity for beginning commanders, with empty pockets. I might have already mentioned it (Oh boy, I did!), but I'm a huge fan of Start Choices. I think a new commander shouldn't begin the game in a Cobra MKIII. He/she should begin in a smaller vessel, maybe even one without a Witchdrive (Krait/Worm) and work his/her way up. This OXP is targeted at this audience. Ideally even with a Cobra MKIII/Normal start it should make a good activity for the first 10-40min of a new game. Just something little to flesh the game and the oolite-universe a bit out.

Also: Mining asteroids is a lot of work and you'll just get around 10cr per ton of minerals, while flying to the sun is much easier and repeatable. It wouldn't be fair nor logical to make more money by sun skimming than by mining. Ergo -> sun skimming must yield very low profits.

I try to make my reasoning on this as short as possible (but it probably won't be):

Some time ago I thought about reasons, why ships only store 7LY witchfuel at most. Disembodied argued, that to create a wormhole, Quirium(witchfuel) is spun very fast and the distance the one can travel is linear dependent of the spinning speed. As the spinning speed approaches the speed of light, it's around 7 LY and that's it. But than again there are other uses of witchfuel. For the injectors for example. Why don't they carry around more? More conclusive jumps. Lower danger to get stuck in interstellar space. Speeding around with the injectors all the way. (Well, it would break the gamebalance. That's the reason. But I had to come up with an in-game reason.)

My guess was, that pure witchfuel in a too high density (the amount of Quirium in a volume of spacetime) would destabilize itself. The more you carry around, the more dangerous it gets. 7 LY is a good trade between safety and usability. Just carry so much around, what you really need.

But how do the stations store it then? How do you ship larger amounts? I came up with the idea of "unclean" plasma, that doesn't "ignite" that fast. The not-quirium-plasma compounds would suppress the reaction. Natural Coronal Plasma, directly taken from the corona (or with a higher quirium density to a certain extent) could fulfil that role.

Then I thought, that this density could be further increased, but refining an artificial plasma mixture. The Quirium Plasma was born and a reason to commute between the main station and the solar station. Also the solar station wasn't just a huge fuel-tank anymore, but it became a refinery. In this OXP Quirium Plasma is the safe form, how all stations store their reserves.

I don't think its worth it in vanilla either. (Both, the shielding and the log trip to the sun.) That's why I thought, let's just do something with this in the beginning of the game, where every credit is worth a lot more.

I see Witchfuel as a very compact fuel. I think 7LY worth of pure witchfuel isn't more than a few litres/gallons of it. Quirium Plasma is transported in tons per unit. So, 1ton doesn't equal 1LY. 1 ton might contain 20-100LY worth of purified/filtered Quirium. The stations have to store it, which does cost them. Also they distribute it. They have to make a living, but....buying 1t QP at 14cr and selling its content (around 21LY = 3* 7LY -> 81cr) for 81cr, that's quite a killing.....Okaaaay!!??...That's not right.

I didn't want to make in-system fuel transportation a too profitable business, to encourage interstellar trading of other goods (what elite is about for a large portion), but those numbers are way too off. Maybe I rebalance it form 2t CP -> 1t QP / QP b:10cr; s:14cr to 10t CP -> 1t QP / QP b:50cr; s:54cr. RESULTS OF FEEDBACK!

But this could make fuel traders attractive for pirates. Bad for beginning commanders. Got to rethink that a bit more.

It was planned this way. Normally the scoops start collecting at around a height of 1.15*sunradius from its core. (0.15*radius above its surface), but when I tried to do this without fuel injectors and/or heatplating the results weren't pretty. It was just impossible for a starter ship. Even more when using another ship (a slower one) then the Cobra MKIII. And don't let me get started about the NPC harvesters I created. :roll: Never to be seen ever again.

The collecting process had to start way earlier to give everyone a chance to survive. Around 1.5*radius was a good value. My explanation is, that higher up, the Quirium concentration is low, but still harvestable. The atmosphere is just not dense enough for the ordinary fuelscoops. The Solar harvesting equipment is able to scoop it. Also at an altitude of 1.5*radius harvesting is much slower, that at 1.15*radius. I made sure of that. (Bigger&faster ships -> faster harvesting/more harvesting per unit time)

Wow, look at that answer post. I hope you can see my reasons for those approaches to balance everything out. If you can come up with alternatives, how to make it simpler and still keep it in balance with the other elements of the game (Asteroid mining, keeping the interstellar trading more profitable), please by all means, tell me or restate them, if you thing I misunderstood your previous reasons somewhere or you feel, that I missed some points.

The Solar station is a refinery. I've created two new commodities ("Coronal Plasma" and "Quirium Plasma") to simulate that the player is hauling in greater amounts of plasma, that aren't preprocessed ("Coronal Plasma") and preprocessed Quirium enriched Plasma ("Quirium Plasma"), that can be distributed to other stations by the player. As witchfuel is so cheap both commodities aren't worth much (around S:4Cr for the CP and B:10Cr/S:14Cr for the QP). It's isn't a job, which gets you rich. It's around on par with asteroid mining.

By the point you own an advanced space compass, you don't need to visit that station anymore, except to sell some food or (a very limited amount of) drugs for some in-system-trading.

A Ship equipped with a Coronal Harvester is able to scoop Quirium enriched coronal plasma in large amounts. The harvester also compresses and stores it away in cheap and reusable folding plasma containers.

This oxp is an Alpha and will thus exhibit interesting errors!