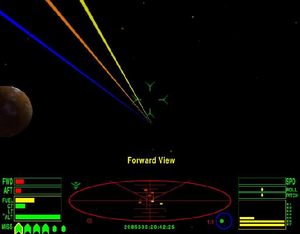 A new and fearsome prospect for the young 'Jameson' is the emergence of the so-called Renegade Pirates. Where these individuals came from is unknown, but speculation is rife. Some say they are the embittered leaders of pirate bands that have been destroyed by GalCop police Vipers, some say they are combat-maddened initiates of the shadowy Assassin's Guild, while still more claim them to be undercover agitators from the Empire or Federation trying to stir up dissent in GalCop space. The most laughed-at rumour is that they are actually members of the 'Dark Wheel', an organisation of expert pirates with an unknown agenda mentioned in the popular fiction novella of the same name. 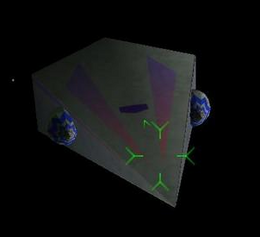 What is known is that these Renegades are highly-skilled, highly-driven pilots. Their skill would indicate Elite Ratings of at least Deadly while their callous disregard for their own safety makes them rightly feared. They favour ships of the old 'Serpent' classes, as opposed to younger pirates who tend to favour the growing numbers of faster and upgraded ships coming onto the market.

These Renegade ships are heavily upgraded with multiple forward lasers and cruiser-grade Twin Plasma Cannon turrets mounted on the flanks. These weapons however appear to have been fitted at facilities unable to properly mount them and as such they are vulnerable to careful laser fire. Regardless, GalCop has placed massive bounties on these individuals' heads, dead or alive, and this alone ensures there is no end of young and hopeful would-be bounty-hunters trying their guns against them. And every so often one of these youngsters actually manages to damage a Renegade before they die.

GalCop are still at a loss as to how they can avert the atrocities of these psychotic and merciless killers, their only resort being to heap greater and greater bounties upon the Renegades' heads, an act that only causes them to become boastful and, if anything, more active as they force their bounties higher. In the run-down space stations of many Anarchies, groups of Renegades cheer each other as their names and ships appear on GalNet news bulletins, along with the lists of their crimes and increasing bounties, while sneering and joking at the deaths of their less fortunate colleagues. Whilst Renegade Pirates are by no means indestructible, their fearsome armaments will cut through a standard shield in moments. Experience has shown that the most effective way for a Commander lacking an Iron Ass to deal with a Renegade attack is to run away. Terribly fast.

These ships are found in the Renegade Pirates OXP