There are a number of buttonboxes/control panels/instrument panels which can be bought to add to the immersive experience. These include the following:

Linux compatibility does not yet seem to be on offer.

These can combine with (for example) a joystick and throttle to give one a feeling of actually flying a cobra, the buttonbox serving as one's astrogation panel.

The various explorers seem to be made of metal. The optional mount allows the throttle unit of a Hotas to be mounted on it.

The plastic Plantilla-cabecera was avowedly designed with Elite Dangerous in mind back in 2017. Perhaps software issues impeded its production? Or maybe the designer left the company? Or they vowed to disavow plastic? 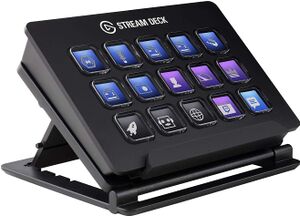 Elgato's Streamdeck is not counted as one of the four joystick controllers for Oolite v.1.90.

It is made of a tough durable plastic with LCD programmable buttons which can also work as toggles where the picture on the button changes when it is depressed.

One programmes each of the buttons individually for its effect in Oolite. One also chooses one's own images for each button.

The StreamDeck shown on the left is the medium sized version (15 buttons).

The Streamdeck shown below is the largest of the 3 sizes - the XL - (with 32 buttons). It has been programmed for 3 different conditions: docked, in-flight and combat. 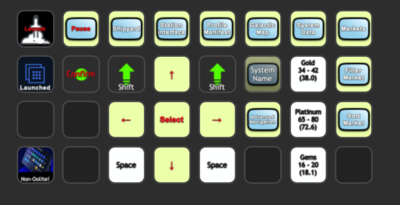 Regular Docked Astrogation Panel
* Notice that not all the buttons have been assigned.
* The buttons are colour co-ordinated with their functions
* Pressing the launch key in the top left-hand corner not only launches one's ship (F1) but also toggles the 'astrogation panel' to the one beneath for flight.
* The 8 keys on the top row merely mimic the F1 - F8 array on the computer keyboard.
* The confirm key is needed for the AppleMac to confirm the instruction to save a commander (Command-R).
* The yellow keys are the arrow buttons and the enter/return key. For manipulations on the F3, F4, F6 & F8 screens.
* The white gold, platinum and gem keys do nothing but merely remind one of the prices above which to sell and below which to buy! 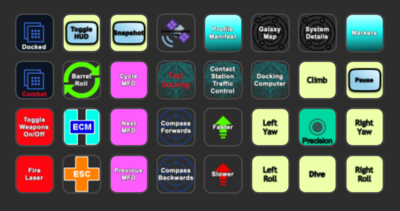 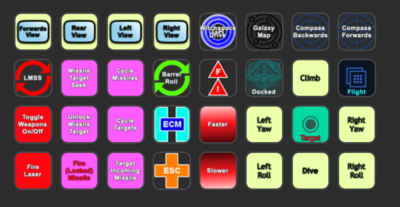 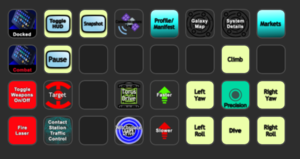 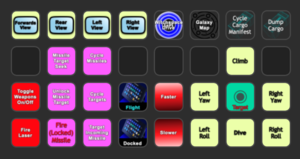 These smaller layouts (and a third layout for the Docked state) were composed for teaching purposes, and thus are as simple as possible. They have been designed for playing the strict version of Oolite without any .oxps whatsoever.

It should be emphasised that the author of this page is by no means an expert in any of this. The designs you see are constantly evolving and are not necessarily the most sensible. You yourself could undoubtedly do far, far better! But you can download his attempts at the bottom of this page. 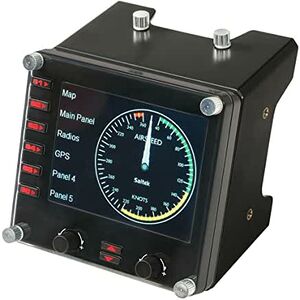 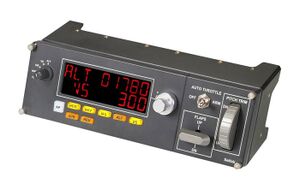 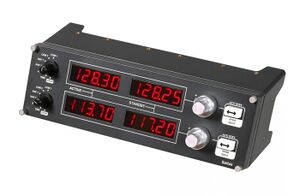 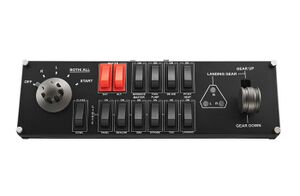 The gauge in the Saitek Instrument Panel actually works (but maybe not for Oolite) - unlike the Thrustmaster offering below. There are quite a number of different settings (for avionics, rather than space, so far). But if you have the programming skills ....

The gauges can be mounted side by side and top to bottom to make say a block of 2x3.

The other panels can be mounted on top of each other.

All of these are Windows complaint. This does not of course intimate that they are Oolite compliant!

While this looks like a gauge, the gauge itself is only a paper insert!
What does work are the buttons on the rim.
20 backlit buttons and then another four switches.
The lighting is adjustable.
It is uncertain as to whether this would be compatible with Oolite. 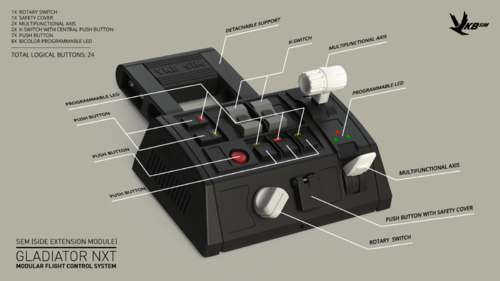 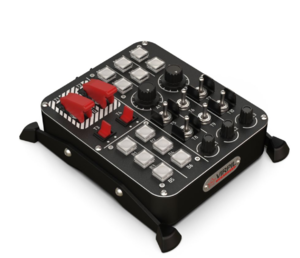 Virpil: VPC Control Panel - #1 made out of metal

If you go back a thousand years or so, there were three Russias: White Russia (Belorussia); Red Russia (Ruthenia) and Black Russia (the fertile black arable land of the Ukraine).
Belorussia is West of modern Russia bordering Lithuania, Poland and the Ukraine (Modern Russia, which had yet to be conquered by the Bogatyrs of Old Kiev or the Ukrainians).
The Bogatyrs were Norsemen who fought their way down the Volga, conquering as they went. Some of them ended up as the elite Varangian Guard of fabled Byzantium.
Other Norsemen invaded French Normandy, using it as a springboard to conquer England in 1066.
Others took over Iceland and then made their way westwards to North America.
Yet others invaded Sicily in the Mediterranean Sea! Busy chaps, those Norsemen!

Etsy.com has a selection of rehabilitated gubbins made by the various companies listed above, as well as some hand made goods.
No details were found as to how one links the hand-made items to the game in such a way as to make them useful, but presumably this information is known to the manufacturers!
One needs to search under simulator to find the various offerings for sale.

This is not an ".oxz": you will need to delete the ".oxz" ending of the filename to use this!