Difference between revisions of "Rise of the Kirin" 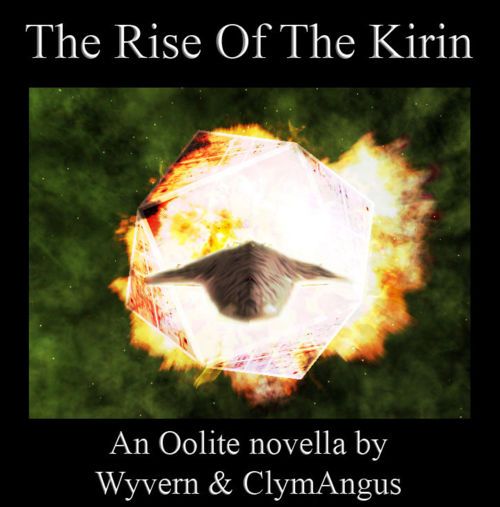 Rise of the Kirin. Cover by Clym Angus

Rise of the Kirin is a novella based on Oolite, by Wyvern and Clym Angus.

"When the notable Freebooter and bounty hunter Derik Roh'i finds his ship impounded by authorities on the snowball system of Tibecia. Little does he realise how seriously events are about to spiral out of control. Presented with an offer he cannot refuse, Derik and his loyal crew must chart a round about course in an untested ship, whilst dark forces are constantly plotting their downfall and counting on their failure."

The novella comes bundled with the kirin.oxp and is available for download here

If your reading this preface, then the cat is already out of the bag; this novella was (for want of a better word) a bit of an accident. It was a flight of fancy, a moment of whimsy in between posts relating to the very serious business of building ships.

It occurred to me some time ago that Oolite was missing something. There had been a lot of talk on the boards about the ratio of ship size to cargo capacity. Station and rock hermit access size, kind of restricted the maximum size of shipping and there was a gap in the market for a really heavy hauler around the 400 ton mark.

After chatting with Wyvern he agreed that we might be able to fill this gap with something a little special, so began the long slow process of creating the Kirin. I brought my flare for art and 3D design to the table, Wyvern brought his considerable skill for making ships work, focused logic, common sense and flawless reasoning. This partnership forced me to raise my game and not accept half measures that had dogged my earlier work.

Honestly, I could talk about the ship all day, how every part of its creation was reasoned over and honed. That would however be fairly pointless, because if your reading this, then you have already downloaded the compressed file of which this pdf is a part.

The novellas genesis is a little more exotic. It began as an creative game between the makers of the Kirin. After about chapter 6 we realized that we might actually have something here. So we kept the game going. Going so long in fact, that we were still writing a good month after the oxp that inspired it was done and dusted.

Looking back, I personally feel Rise of the Kirin serves several important purposes; It enabled both of us to cut loose with a creative project that didn’t involve photoshop or plist text editors. Secondly it enabled us to write our characters into the fabric of Oolite fiction (always cathartic) and finally it kept up the grand tradition of supplying a book with the software to “sweeten the deal”.

Special thanks to everyone on the Oolite forum who helped hone the grammar and point out those little inconsistencies you get when your too close to a project.

Extra special thanks to _ds_ for doing a lot of the ground work for the pdf.