The Royal Hunting Lodge is available in the: Feudal States OXP.

Whilst hunting lodges do sadly require defences against some of the more unsavoury elements who have taken to frequenting the Feudal Domains in recent times, they are nevertheless possessed of a wide variety of entertainments.

Note that entrance is only allowed to those who bear the appropriate dress. Do not attempt entrance in informal attire as you will be barred from the premises. The staff usually maintain a selection of formal wear for inappropriately clad visitors, which can be borrowed for a consideration.

First, one should mention the dance floor and the accompanying cocktail bar. The well-sprung floors, the cut crystal chandeliers, the magnificent array of portraits of the systems leading nobility all lend a certain ambience which is amplified by the melodious outpourings of the orchestra and the incense which is dispensed by swinging thuribles. The decorous livery of the servants combined with the elegant ball gowns and the gala-dress of the gentlemen lends an aura of refinement and excellence to the spectacle.

Then there is the dancing. This can be quite complex. Consider the furore concerning the gavotte:

The Geisgezan Gavotte - a vulgar display of animality and aminadversion requiring the lifting of the left foot on the second beat, in a sort of stunted canter, accompanied by a tremulous twitch of the thumbs and left earlobe. The Geisgezans, who suffer under a grinding gynarchy, apparently developed this most bizarre display of gymnastics in an symbolic attempt to re-assert their individuality. Under the influence of some of the most notorious narcotics and a metallic musical cadenza, this gruesome and ghastly concatenation of contortions spread from the surface of their planet to a number of the surrounding systems, where one can doubtless encounter some of its erstwhile proponents.
Then there is the gracious and gleeful Galaedian Gavotte, which currently is much in vogue on Digebiti. On the third beat, one raises ones head to larboard, and holding one's lady gently by the waist, leads her with great delicacy and determination into a widdershins weave of some 13 steps, whilst wandering westwards with great aplomb. Please inspect the relevant Entry in Theramoan's Terpsichorean Treatise of Tentative Two-steps. You might also care to peruse the brief sketch in the Smivian Synopsis of Steps of Sovereignty.

Second, the Trophy Room, where the tournament trophies are displayed with the details of their current holders. The most famous are immortalised in statue beside the display niche. There are sometimes displays of laser-burnt parts of ships, remnants of particularly vivid tournaments, oft-times accompanied by either a holo-stim or a painting of the event. The trophy room is usually hushed, with walnut beverage tables, newspapers and a sombre mien. At least two of the walls sport banners and flags. 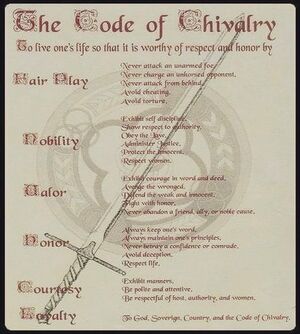 Third, the Dining Hall, where banquets are customarily held to celebrate notable visitors - or victories in jousting. The walls are oft-times wooden-panelled and always emblazoned with the Code of Chivalry. There are several variants of these, in Galaxy 1, that of Ianbello degli Sciolti has proven most popular, and is infused with the spirit of the Church of Giles the Creator. The most famous of the Grandi Commendatori of the Edible Poet Society of Tibecea, his rhyming code is oft-times accompanied by his famous statue of his version of the Code in the Lodge's Dining Hall.
The degli Sciolti variant runs:

Another variant, that of the (Dastard) Duke of Digebiti, Decirion the Dark-eyed is shown on the right. Note the varying emphases laid on the Church of Giles the Creator. There are minor variants favouring other religions, but the CGC has proven the most influential at influencing such codes in the first two galaxies.
Banquets tend to great formality: the Grand Procession of Nobility, as the various jousters enter the Dining Hall, with one's position in the Procession laid out by unbreachable rules of etiquette. The Toasting of the Cup after the first seating, as the Cup of Chivalry is toasted (the statue by degli Sciolti referenced above has a cup-shape, but other interpretations abound). The third course is almost always fowl accompanied by sweet white wines. A philosopher is often invited to speak after the sixth course on the Metaphysical Mysteries. Lutenists & harpists regularly play after the seventh course in the western half of Galaxy 1, their performance lasting through the next two courses.

Fourth, the Robing Rooms, where the jousters can prepare for their tournaments.

Fifth, the Halls of the Adjudicators, where the Judges maintain their offices.

Lastly, there are often shrines/chapels dedicated by such as the Church of Giles the Creator or that of Randomius Factoria.