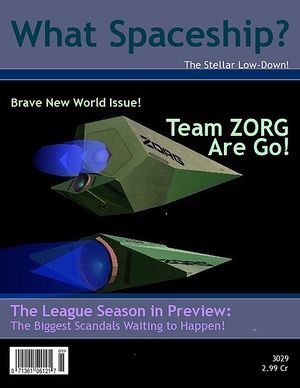 Team Zorg won the Herclic Trophy at Sector1/Diso at their foundation last year.

Zorg Spirits, after worst-than-expected sales reports in the Lethal Drinks sector, have bought an independent team and renamed it Team Zorg. Initial interest was exponentially boosted when the lobster CEO of Zorg Spirits (Zorg, son of Zorg, son of Zorg) secured an exclusive with What Spaceship? holovid magazine thanks to a rendered graphic of a possible Team Zorg livery and a four-minute exclusive interview with the publication.