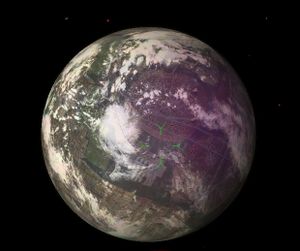 "Center of the Xexedi Cluster and the Western part of Galaxy 1. This planet houses a city that covers the whole planet. Xexedi's high tech level reflects in the futurisic towers, domes, houses an mordern transport on the planet. The famous beauty company L' Ooreaal, Zorgon Petterson Group and Oocruise have their HQ on the planet. Xexedi is known for the Xexedi skyneedle a 2 mile high skyscraper."

"The planet Xexedi is scourged by a deadly disease."

The instant you drop out of witchspace into the Xexedi system, you can see that it is one of the busiest systems in the known Ooniverse. For one thing, you're never alone on the inflight corridor - almost as soon as you pop in, you'll find yourself in the presence of ships - some bulk haulers carrying the billions of tons of food, water and other products necessary to fuel the planet-spanning city, others carrying delegations and dispatches to the millions of corporations that have their headquarters on (or partially under) its surface - including such household names as L'Ooreal and Zorgon Petterson. All of these, plus the myriads of freelance traders (such as yourself) and curious tourists from the far corners of the Eight Galaxies, combine to form a traffic stack that stretches all the way out to the witchpoint. Xexedi's Traffic Control Division has a larger fleet and budget than some systems' entire police forces, and the single orbiting Galcop station, though housing one of the largest hangars seen anywhere, is woefully inadequate to cope with all the vessels that come and go. Most of the larger hauling corporations, in fact, have either constructed their own stations or negotiated to have their fleets shuttle their cargoes directly to the surface. Even then, the station itself highly encourages a constant traffic flow by imposing steep extra fees on pilots who intend to stay docked longer than three standard hours for any reason other than a medical or mechanical emergency. Constant bustle and high prices for everything are constants on Xexedi, no matter where you go.

Once you reach the "surface" (many residents spend their entire lives without ever setting foot on the ground level of the planet), you discover that Xexedi is a cosmopolitan place. Officially the native froglike Xexedians make up the majority of the population, but a quick glance at the crowded walkways shows sentients of every species, color and body type, most of them trying to push their way through the crowd with varying degrees of success and urgency. The ever-present mass of people is quite a different experience from the usual spacer lifestyle, where more than ten contacts on a scope is a "crowded neighborhood," and even veteran pilots may start feeling claustrophobic.

One of the first things you want to do after you've recovered your composure is to find yourself something to eat, and what better way to do that than to enjoy one of the most upscale restaurants in the Eight? It's going to be expensive, but if you've managed to make it this far already, you probably have money to burn anyway. No matter what your preference, you're guaranteed to find some high-class establishment that caters to it. Try to check in advance both for available reservations and for proper attire at one of the handy pay-terminals first, though, especially as some places will actually charge money for wasting their time if you try to get a table without either. You might also wish to check out one of the planet's Hyper-Malls, featuring stores with cutting edge technology and fashions that are ten years ahead of the rest of the Ooniverse. You can even marvel at the wonderful interactive advertisements that detect when you take a gander at their products and archive your retinal patterns so that the next time you look at one, it will automatically tailor itself to suit your interests.

No tour of the Capital Financial District is complete without a tour of the Xexedi Skyneedle. This single tower is the beating heart of an entire Ooniverse's commerce, housing the corporate offices of almost all of the FortOone 500. The Skyneedle towers over its surroundings at the impressive height of two miles; while most spacers will be hard to impress, having spent most of their lives some thirty times above a planetary surface at least, the view from the top is certainly something not to miss, especially at night.

Of course, Xexedi is not without its hidden dark side. Living on the planet is staggeringly expensive, and while many white-collar workers make truly impressive salaries, a high percentage of these go towards paying the prodigious rent rates and the high cost of daily necessities. Those lower on the pay scale are even unluckier, often effectively selling themselves into indenture to one of the major corporations simply to make ends meet. Finally, while the planet seeks to present a shiny, glossy public image, once you step beyond the financial districts you encounter billions of acres of factories and processing plants, spewing out toxins and carcinogens into the atmosphere at alarming rates. In fact, almost every resident eventually develops some kind of respiratory problem - even the most advanced filtration systems cannot cope with the volume of pollutants pumped into the air - and most die before reaching middle age. Finally, there are nasty (though unproven) rumors that even the massive tonnage of shipped foodstuffs are not enough to satisfy demand, and therefore the corporations have resorted to some rather gruesome alternatives to avert the threat of famine...

Also, a word of warning: Be wary should you ever be informed that you are eligible for an all-expenses-paid vacation to Xexedi, especially if there seems to be a typo in the system's name. One rather unfortunate scam is to trick the victim into accepting a "chance of a lifetime," only to find that most of the trip is spent within a sealed cargo crate - and that once they arrive, they will be spending the rest of their days toiling as slaves in the fields of the sulfurous, volcanic hellhole Xexeti.