Based on an ancient generation ship travelling in deep space, Wolfwood Interstellar Technologies is a small shipyard that specialises in customised ship bodies and breathing new life into ancient hulks of past models from bigger shipyards. WIT is perhaps most famous for the Cobra Courier and Cobra Rapier - both variants of the classic Cobra Mk III.

Marcan Wolfwood started out as a simple shipyard technician, but always dreamed of designing his own ships. He later moved on to refurbish certain classic but discontinued designs, such as Drake and Asp Mk.I. These quickly became successful amongst hobbyists and soon Marcan Wolfwood started designing his own ships. One of the first of these was the Drake Mk II, its looks inspired strongly by old Earth lizards.

Despite the relatively low popularity of his own designs, Wolfwood Interstellar Technologies was born and more unique designs followed. These proved even less successful than the Drake and WIT soon turned their eyes back towards the hobbyist and specialist market. Thus was the Wolf Mk I born and it became an instant success. Encouraged by this, WIT turned their attention towards the classic Cobra Mk III and some years later produced two variants of this classic ship, Cobra Courier and Cobra Rapier, both of which brought WIP the fame and success that Marcan Wolfwood had only dreamed of.

WIP relies heavily on their Cobra variant and does not seem very interested in producing new ship models, apart from various concept designs that rarely get past prototype stage. Marcan Wolfwood himself spends most of his time flying around in one of his ships, appearing at interviews when he feels like it. 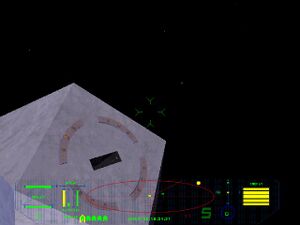 The ships from WIP can be found in the Wolfwood's Variants OXP or, alternatively, in the Neolite Wolfies OXP.