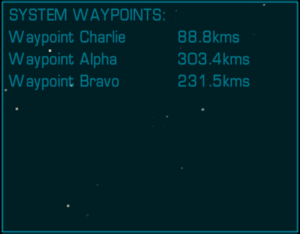 Want to be able to find your way back to a specific location within a system without leaving behind an expensive piece of equipment that uses up a valuable missile pylon and could be damaged or scooped before you get back? The latest advances in HUD technology allow Talaxian Enterprises to offer a solution.

Waypoint here is a software upgrade for your Advanced Space Compass. It allows you to set up to eight waypoints, anywhere in the system. If your HUD is configured to display waypoints these will be visible on-screen, with a range indicator.

Also included with the equipment is a Multi-Function Display (MFD) which will display the first 9 waypoints currently set in the current system. The display will also include the distance to those waypoints. When in Interstellar space, directional pointers will also be displayed next to each waypoint, to aid with locating them (because the Advanced Space Compass does not function in Interstellar space).

To use Waypoint Here functions, you'll need to first prime it with 'Shift-N'.

To add a waypoint at your current location, press 'n'. Your position and orientation will be recorded and one of 8 ASC beacons will be assigned.

To clear a waypoint, select the waypoint you want to remove on the ASC and press 'b'.

For using MFD's see MFD: you will need a HUD (such as the Vanilla game HUD) which supports MFD's.

Waypoints can be deployed in Interstellar space, although the Advanced Space Compass cannot be used for locating them. Instead, the MFD will include directional pointers to each deployed waypoint.

Also, as soon as you arrive in Interstellar space, a waypoint will be deployed at the witchspace entry point, which can aid in rescue operations.

There are 8 available beacons, called Alpha, Bravo, Charlie, Delta, Echo, Foxtrot, Golf and Hotel. When you add a new waypoint through Waypoint Here the first available beacon will be used. The symbol on the ASC will be the first letter of the beacon name.

As with other methods of marking a specific locations the waypoints are cleared when you leave the system. Waypoints are not currently saved, so if you save and reload the game any Waypoint Here waypoints you had set will be lost.

Being a software upgrade Waypoint Here can not itself take damage in combat. It will however stop working if the ASC is damaged.

If the waypoints do not show up on your screen you may need to adjust your HUD settings to include a drawWaypoints dial or switch to a HUD that already includes it. This dial was introduced in Oolite version 1.79 so older HUDs probably won't include it unless they have been recently updated.

This work is licensed under the Creative Commons Attribution-NonCommercial-ShareAlike 4.0 International License. To view a copy of this license, visit http://creativecommons.org/licenses/by-nc-sa/4.0/.