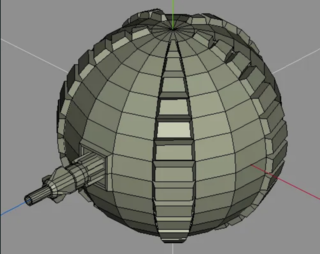 Shipbuilder is a relative newcomer to Oolite who joined the forum in May 2012. Having played the original Elite on a BBC model B during the 1980s he believes that Oolite has recreated and improved on the original. The concept of an open ended 'do whatever you want' style of game where the player is but a very small part rather than the central point of what is going on around them is key to the addictive nature of the game. It is however the intentional expandability of Oolite where anyone with a little time and effort can contribute to producing expansion packs, (OXPs), of a multitude of natures that really interests him.

With this in mind and his longstanding interest in spacecraft Shipbuilder has tasked himself with developing and releasing a series of ships both from TV and of original design.

The long term objectives are twofold. Firstly to release craft of varying styles, sizes and types to suit all interests and secondly to ensure that any ships issued are to be produced to the best of his current abilities. The focus will therefore be on quality of ships rather than quantity.

The first OXP to be released, following help and advice from Cody was a remodelling of a Colonial Viper from the original 1970’s version of Battlestar Galactica. Since then there has been a steady release of a number of additional OXPs all of which are listed below and are available for download.

As Shipbuilder’s knowledge has developed he has also assisted with a number of other people’s OXPs some of which have been released while others are still being developed. A list of those released is listed at the bottom of this page with a link to the Wiki page for each.

A recent development in the OXPs being produced is the use of shaders to enhance the aesthetic appearance of the ships being produced. To complement this recent development a shader tutorial and resource pack has been produced to provide step by step guidance on how to incorporate shaders in to OXPs. Both the tutorial and resource packs are available to for download (See the bottom of this page).

In an attempt to gain a foothold in the shipbuilding industry a small but high tech shipyard was constructed in the rich industrial system of Ceesxe located centrally in Galaxy 1. Following the successful, and some say suspicious, negotiation of a number of military contracts and the acquisition of competing shipyards in the nearby systems of Gerete and Edle both the size and capability of the company greatly increased to what is now known as The GalTech Industries Corporation.

The successful launch of the Chimera Gunship, Serpent Class Cruiser, GalTech Escort Fighter and most recently the Fireball in conjunction with supplying their military contracts, has allowed massive investment in both further ship development and expansion of the main facility orbiting Ceesxe.

My OXPs currently under development

1) Lightning Mark 1 - Fast interceptor with good manoeuvrability and speed but no cargo capacity.

2) Siren Mark 1 - Multi use trading vessel with a 60T cargo capacity and reasonable manoeuvrability and speed.

5) Apache Class Heavy Freighter - A 200T freighter with limited manoeuvrability and speed but armed with 2 plasma turrets in addition to the usual 4 gun mounts.

6) A range of Turrets for use on various sized ships and stations.

Other OXPs that I have helped with

Tutorial on the use of shaders in Oolite

The tutorial document can be downloaded in pdf format here https://app.box.com/s/adl2gw654juwlkamyeol

The accompanying resource packs can be downloaded here https://app.box.com/s/njsbp935aseegsegh18l