From Elite Wiki
< User:RyanHoots
Revision as of 21:51, 28 June 2012 by RyanHoots (talk | contribs) (Might as well have a subpage for my ship, after all, I've flown Taylor Miller longer than any other ship.)
(diff) ← Older revision | Latest revision (diff) | Newer revision → (diff)
Jump to:navigation, search 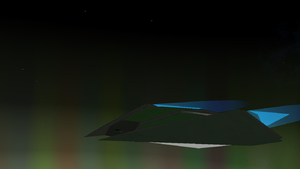 The one and only Koneko Kobra Mk3, Taylor Miller.

Taylor Miller is Ryan Hoots' ship in Oolite. Purchased at Zaatxe in chart one on November 26, 2011, the ship was Hoots' reward after two days of playing Oolite nonstop, doing trade runs and passenger trips. The ship is named after an old friend of Ryan Hoots in his real life. In fact, it's safe to say that the ship Taylor Miller is a lot unlike the real Taylor, so Hoots is unsure why he chose the name in the first place. But somehow, the name has stuck, despite attempts to change it.

Originally, the Cobra Mk3 was not quite right for Hoots, as it was more geared towards trading rather than fighting. So, the ship was quickly modified to become the first Koneko Kobra, a ship type that is now for sale on the market. Faster than a Cobra, but with less cargo space and missiles, the ship is a good balance between a fighter and a light trader. The ship was retrofitted two more times, the result being the Koneko Kobra Mk3, which is more aimed at fighting than trading.

Nowadays, Taylor Miller and her pilot can usually be found in chart five, normally within ten light years from Cesoulsa.