Level one (Anarchy) gives 'Pirates' better weapons and a higher chance of more equipment, making them stronger than in standard Oolite. Their most feared ship is the Python Blackdog, taken from standard Oolite. This level is the equivalent of the original ToughGuys OXP.

Level 2 (Apocalypse) increases further the strength of Pirates and Criminals and introduces the feared 'War Dogs', large strong vessels such as the Boa Pitbull and Boa2 Rottweiler. Level 2 also adds tougher Traders and escort vessels in an attempt to counter the Pirate threat.

Level 3 (Armageddon) should not be considered survivable. The criminal elements all have fully equipped Iron-Ass ships including many 'War Dogs'. GalCop up-grade the weaponry on their Viper fleet, and introduce the Constrictor super-fighter. Despite this, the Police, traders and yourself will all be seriously outgunned. It is, quite simply, Armageddon! 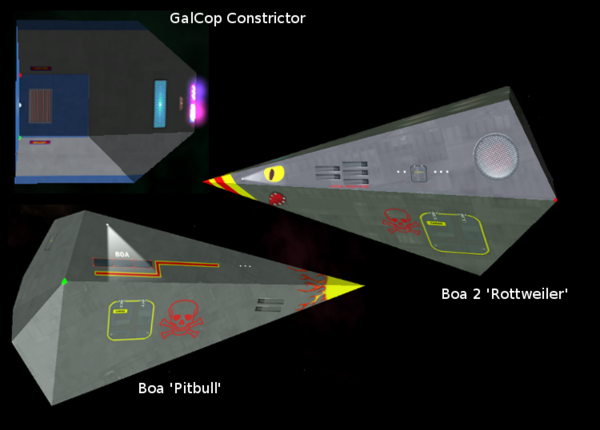