2) Using your imagination and degree of immersion in the game this OXP will also allow you to witness and participate in a descent into total lawlessness across the Ooniverse where Pirates and Criminals are in the ascendancy and GalCop forces are overwhelmed. There are no specific missions and it's entirely up to you and your imagination to flesh-out the scenarios. This OXP will give you the emvironment you need to do this. This fall towards Armageddon occurs in three phases, and you can work through this as you see fit, quickly if you want to, or perhaps over many weeks or even months. When you think it's time for things to get worse remove the current level from your AddOns folder and install the next level. Of course if you want the situation to improve, you can re-install a lesser level at any time.

ToughGuys:Anarchy Law and Order is collapsing across the Eight Galaxies. Criminals and Pirate Gangs are growing stronger and more bold, and the threat to innocent citizens is causing great concern. The spacelanes are becoming very dangerous places, but you should still be safe in an Iron-Ass ship with a good Commander at the helm.

ToughGuys:Apocalypse As time passes, the situation becomes critical. Civilian and Merchant shipping is becoming ever more heavily armed to deal with the criminal insurgency. With the Navy fully occupied dealing with the Thargoid threat GalCop forces are out-gunned and struggling to contain the menace. The Pirate marauders continue to re-arm and strengthen, adding bigger stronger ships to their fleets, while the civilian population cowers. Open warfare is commonplace throughout the spacelanes.

ToughGuys:Armageddon Out-gunned and out-numbered, GalCop forces can no longer maintain Law and Order, and the Pirate Alliances become the dominant force in the Ooniverse, their heavily-armed ships destroying all in their path. Anarchy rules the spaceways and no ship is left to pass in peace. In a last-ditch attempt to restore Order, GalCop takes the expensive step of up-grading the weaponry on it's vast fleets of Vipers, and learning that the Navy is about to take delivery of several hundred of their much-delayed new super-fighter the Constrictor, GalCop controversially requisitions these and adds them to their Police Fleet. In a bid to gain total supremacy, the Pirate Alliance forces begin to blockade the industrial worlds across the Eight Galaxies in a bid to cripple trade and force GalCop into capitulating. Even with their new-found fire-power, the GalCop forces struggle to make any impact. And yet against all the odds, a few brave souls, known only as 'The Commanders' still fight back. These pilots are the finest warriors the Ooniverse has, and they will not concede defeat. They continue the fight to rid the spacelanes of danger in the full knowledge that the odds are against them, their cause is hopeless, and their death lies but a Jump away.

Details: Level one (Anarchy) gives 'Pirates' better weapons and a higher chance of more equipment, making them stronger than in standard Oolite. Their most feared ship is the Python Blackdog, taken from standard Oolite. This level is the equivalent of the original ToughGuys OXP.

Level 2 (Apocalypse) increases further the strength of Pirates and Criminals and introduces the feared 'War Dogs', large strong vessels such as the Boa Pitbull and Boa2 Rottweiler. Level 2 also adds tougher Traders and escort vessels in an attempt to counter the Pirate threat.

Level 3 (Armageddon) should not be considered survivable. The criminal elements all have fully equipped Iron-Ass ships including many 'War Dogs'. GalCop up-grade the weaponry on their Viper fleet, and introduce the Constrictor super-fighter. Despite this, the Police, traders and yourself will all be seriously outgunned. It is, quite simply, Armageddon, the end of all Worlds... 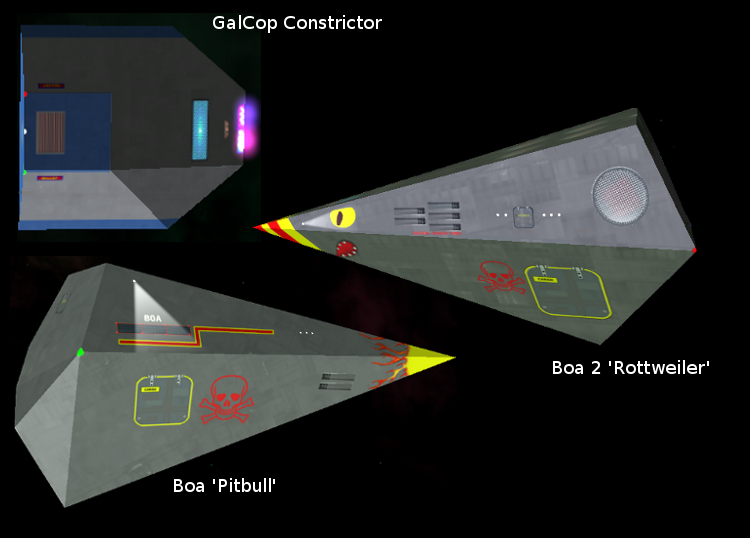 The standard edition is suitable for basic Oolite, and is suitable for basic Oolite (where no other OXPs are installed). It should also work well with most other OXPs, although you may find some interesting cross-OXP 'features'. Please report any incompatibilities via the ToughGuys2 thread on the Bulletin Board. It has been coded for and tested as working with the individual download versions of Griff's Ships, and should work with any other replacement ship set using the default ship names.

There are also two special editions. One is optimised for Griff's all-in-one ship set. The other is optimised for Smivs'Shipset, and includes unique textures for the GalCop Constrictor and the Boa and Boa 2 Pirates (see picture to left).

This work is licensed under the Creative Commons Attribution-Noncommercial-Share Alike 3.0 Unported License. To view a copy of this license, visit http://creativecommons.org/licenses/by-nc-sa/3.0/ or send a letter to Creative Commons, 171 Second Street, Suite 300, San Francisco, California, 94105, USA. The OXP was developed by Smivs. Special thanks go to El Viejo for many hours of testing and much invaluable feedback, and Another_Commander for his help with the Blockade Script. Thanks also go to Fatleaf and Gogz69 for testing and feedback.