Turns the STE's target lock box red when on target.

Not yet on target

This OXP adds the equipment: Target Reticle Sensitive. This is an add-on to the normal Target Reticle in the View Screen. It makes the target lock box turn red when on target. It requires the Scanner Targeting Enhancement. 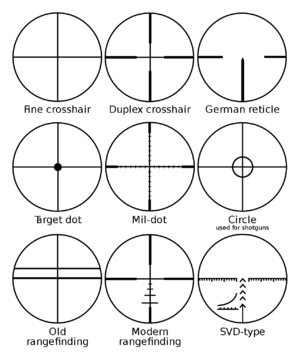 A comparison of different reticles used in telescopic sights

A reticle, or reticule (also known as a graticule), is a pattern of fine lines or markings built into the eyepiece of an optical device such as a telescopic sight, spotting scope, theodolite, optical microscope or the screen of an oscilloscope, to provide measurement references during visual inspections. Today, engraved lines or embedded fibers may be replaced by a digital image superimposed on a screen or eyepiece. Both terms may be used to describe any set of patterns used for aiding visual measurements and calibrations, but in modern use reticle is most commonly used for weapon sights, while graticule is more widely used for non-weapon measuring instruments such as oscilloscope display, astronomic telescopes, microscopes and slides, surveying instruments and other similar devices (from Wikipedia).

Allows one to restrain firing the laser (and thus heating it up) until the target is in the sights! This was a favourite in the old days. Now, most of the newer HUDs feature this automatically.