N.B. This shipset is no longer supported. It has been superceded by The Classic Ships

This Oolite Expansion Pack (OXP) is a replacement texture set giving the ships in Oolite a new 'realistic' look. This is achieved by applying new textures (skins) to the original models which improve the look of the game while preserving authenticity and originality... the ships are the same shape, but much better looking!

The models used are the original models from Oolite v1.65 which have been adapted for use in Smivs'Shipset. These base models have been enhanced with the addition of gun and engine sub-entities.

Smivs'Shipset v4.2 includes additional versions of many of the standard ships for more variety. In total, there are over 40 different ship textures.

This OXP features some beautiful lighting effects which do not require shaders. The ships have illuminated cockpit and porthole windows, strobing Navigation Lights and other additional lights, plus 'glow' effects for the radiators/heat-exchangers and the ships' hulls also have realistic shininess and reflectiveness. Several ships also feature hull spotlighting. The Thargoid Warships have the alternating red/green colour as described in the Wiki. 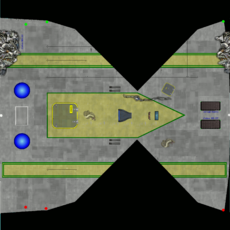 Smivs' texture for a damaged cobra

Smivs'Shipset v4.2 is the first Oolite ship set with dynamic textures which change in game to show NPC damage during combat. If you or an NPC shoot-up another ship to the point where its shields fail and it starts throwing sparks, the texture is changed 'on the fly' to one with visible damage - you will actually see laser scoring and holes punched in the hull.

If the ship under attack has an escape capsule and the pilot ejects, the ship will then go derelict. As the reactor shuts down the engine glow fades and the ship starts to tumble gently in space. As it tumbles, it loses all power. The interior and external lights fade out, and finally the ship loses its navigation strobes.

Another exciting visual feature of v4.2 is enhanced death effects. Normally, when you kill another ship you get a brief and rather weedy little flash. With Smivs'Shipset v4.0 when a ship is destroyed, it will explode dramatically, and for a split second you may even see large chunks of burning wreckage before they also explode.

Accessories OXP is the companion to Smivs' ShipSet, and adds all the non-ship objects. Together these two OXPs replace every standard object in Oolite.

This work is Licenced under the Creative Commons Attribution-Noncommercial-Share Alike 3.0 Unported Licence. To view a copy of this Licence, visit

A very big Thank You to Capt. Murphy for much useful testing and feedback, and for transforming over 30 shipscripts into one elegent single unified script.

Thanks also go to Okti, Ahruman, Thargoid, Eric Walch, Capt Beatnik, BuggyBY and Cim for helpful advice, suggestions and bug reports both during development and post-release, and to Commander McLane for pointing out a long time ago that it seemed a bit odd that derelict ships still had all the lights on!

Released 25th April, 2013. Features a graphical upgrade to the Thargoids and several improvements and minor bugfixes to the code.

Bugfix releases. 25th/26th Feb, 2012. Previously, a player accidentaly shooting explosion debris in the presence of Police could get an offender tag. v4.1.1 ensures that shooting the debris does not count as a kill. Minor coding fixes.

Shipset SD version v1.1 - Bugfix released on 22nd May 2010.
There was a slight error in the shipdata.plist on the Standard Definition edition of the Shipset which caused the exhaust flumes on the Boa Class Cruiser to be in the wrong position, and the exhaust flume of the Boa to be far too big. This has now been corrected in version 1.1. The High Definition edition is OK (I'd changed them here during testing, but forgot to transfer the changes to the SD edition).

Smivs' ShipSet is available in two forms, a 'Replace' version which simply replaces the in-built ships, and an 'Add' version which will add Smivs' Ships to the default set and/or any other replacement shipset/s that you may use.
Both versions have two texture options available. There is a Standard Definition (1024x1024px) edition suitable for computers with on-board graphics, and a High Definition (2048x2048px) edition for use on computers with dedicated graphics cards.
Decide which version is best for you and download it. Place the complete .oxp folder into your AddOns folder.
Consult the Wiki or BB if you are not sure where this is.