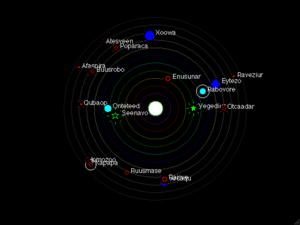 One of Dr Beeb's eight Galactic Navy academies in Galaxy 8 is here at Vegedius (his naval variant of the Lave Academy).

The Freeland Academies of Galaxy 8 supply a significant fraction of the Galactic Navy's officer corp. There are concerns that the significant losses in the war against the invading Thargoids could lead to significant political instability.

With the sudden expiration of the Vegedius Academy Master during a delectable course of wolf meat the senate was finally able to remove his mile-high white marble statue that was rapidly becoming an object of worship by the recently disillusioned populace. The abandonment of the ancient volcano-worshiping belief systems on Vegedius was stimulated by the terraforming of customized volcanoes by the rival Usreinxe academy.

One of Dr Beeb's PS systems in Galaxy 8 is here at Vegedius. See PS Vegedius System and Planet Scanner. There is no .oxp. 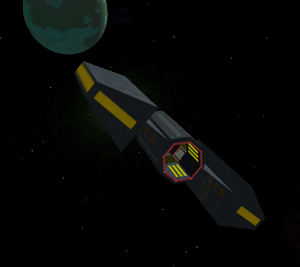