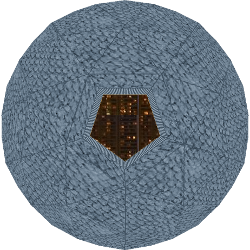 Aqualina is the proper name for the planet christened Ribiara by earlier colonists. A new HQ station is added to Aqualina as are new ships. Aqualina is the centre of the Aquarian Shipbuilding Corporation.

The corporation are well known for producing a wide variety of ships in the Aquatics collection, ranging in size from small military fighter ships such as the Barracuda and the Manta Ray right up to gargantuan vessels such as the HammerHead transporter and the mighty Leviathan system defense platforms.

The Aquarian ships such as the Vortex, a military blockade runner, were important in deciding victory in the recent Sector Wars.

Ribiara is a member of The Sidewinder Expanse region.