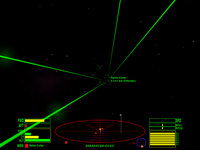 The Rattle Cutter (or just Rattler, as it is known to most pilots) is essentially a manned weapon. Described as "gruesome" by the Xeer Citizens Concern Over Weapons Proliferation, this epithet is not an exaggeration. The ship was designed as a military vessel, and is unusual that the manufacturer, Murgh Shipyards of Teorge, developed the ship without an invitation to tender. It was developed speculatively on the good information that GalCop was looking for a more powerful ship to equip Behemoth warships to be used in battle against the Thargoids. However, no contract was forthcoming, and Murgh Shipyards was forced to sell the ship on the open market to avoid bankruptcy due to the colossal funds required to develop the ship.

Most ships in service today are designed around a myriad of standard fittings, and as such, you can go to a shipyard and fit virtually any kind of equipment without needing to specify the kind of ship: the mountings and sizes are all standardized so, for example, a military laser will fit in any ship that has the room and an available mounting. The Rattler is different. To avoid the compromises needed to have a plug-in-anything-and-play ship (often known as 'plug and pray' by more cynical commanders), Murgh Shipyards instead fitted entirely custom equipment, tailored specifically for the Rattle Cutter. This enabled the fearsome armament of four beam lasers that fire simultaneously - the idea being that the Rattler would be used for pre-emptive strikes on other ships. The four lasers can tear a ship apart before the commander has an opportunity to assess the situation.

Everything about the ship is optimized for a quick first strike. Recognising that without the room to have other weapon mountings, the ship would be vulnerable if it did not eliminate its target on the first run, the ship comes equipped with military shield boosters and shield enhancers. This is of course also useful in the ship's other intended role: combating Thargoid warships. Although the Rattle Cutter can hit a Thargoid warship very hard and very quickly, it needs protection against Thargons and other Thargoid warships in the area. The Rattler is highly effective especially against larger victims, where it can easily bring all four lasers to bear simultaneously.

The widespread use of the ship as a weapon of crime caused the citizens of many planets to protest to their governments with the aim of banning the ship (or other similar specified ships) to anyone other than law enforcement or the military. Responsible owners of Rattle Cutters retorted by modifying an old cliche: "Rattlers don't kill people, people kill people". Seeing the handwriting on the wall, Murgh Shipyards voluntarily restricted sales to "official purchases only". For a time, this settled the protests - however, the company has never actually defined who it considers "official", and the more cynical campaigners have alleged that the company treats "official representitives of pirates and assassins as official".

The Rattle Cutter is found in the latest version of Military Fiasco OXP.