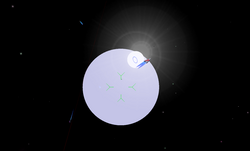 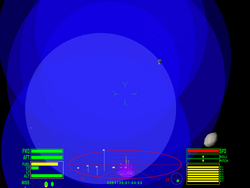 Simply put, a Q-bomb (or to use its proper name, a quirium cascade mine) is a chain reaction device. It is a very small bomb, and has been described as being 'like a minature supernova, and just as deadly'. The gravitic shockwave it emits causes any matter caught within its range to be annihilated in another deadly gravitic flash, resulting in a 'domino topple' effect. This means the initial Q-bomb explosion is only the start. Secondary explosions (the strongest caused by the destruction of its victims hyperdrives) progress in much the same way, catching further objects - until there is no more significant matter to be consumed by the expanding waves of destruction.

The Q-bomb is carried on a standard missile mounting point. Select the Q-bomb like any other missile (T). It does not need to be fixed on any particular target (and cannot be targeted). Release it like a normal missile (M). Be sure to drop it as close to the centre of any action you wish to see an end to.