Phantom is a trader/fighter from Isis Interstellar with external missiles 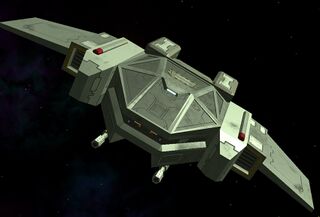 First developed as a multi-role military vessel, the Phantom has recently been adapted and sold to private companies. The original vessel was designed to fill a role that emphasised adaptability for the Navy. To that end, Isis Interstellar developed a modular design that enabled rapid alterations to fit a given scenario. The Phantom is a tough, fast ship of fairly slim profile, making it a worthy combat vessel.

Fitted onto the wing structures are two modular pods, that can be custom designed to fit particular needs. Left mainly empty, the ship could be a cargo hauler for the military, carrying 45 tons of equipment. Change the pods to bespoke medical-capable chambers and the ship became a rapid cas-evac vessel capable of taking injured personnel rapidly out of danger while providing medical care. Change out the pods to a personnel carrying configuration, and the Phantom is capable of carrying forty fully equipped troops to the battlefield, armed and armoured enough to provide full fire support upon their arrival. 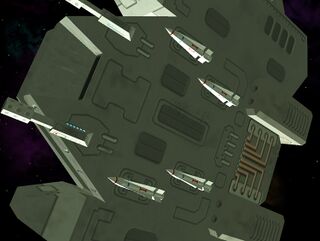 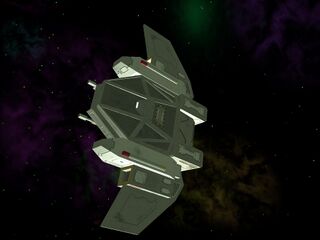 The ship saw a new development for Isis Interstellar : this is the first ship to carry externally-mounted missiles. This feature allowed the whole of the internal space to be better adapted to equipment and cargo space. Building on this decision, Isis Interstellar was party to developing a new Advanced Space Missile for the Navy. Bigger, faster, more agile and more powerful that standard missile, the ASM-54 Firebird is fitted with EMC-proofing and is a fearsome weapon.

Another innovation is the placement of the scoops. Normal cargo is scooped under the nose and deposited directly into the cargo hold. For sun-skimming however, two large filters were fitted into the wings, directing the retrieved fuel directly into the holding tanks in each wing.

After some negotiations, Isis Interstellar have produced a civilian version of the Phantom. Available from Tech Levels 7 and up, the Phantom provides a solid multi-role craft for the discerning pilot. Although multiple lasers and Isis Interstellar’s external missile system are still not available to the public, following numerous enquiries the company has provided a customised version of the ship featuring replica weaponry. This “Intimidator” variant is available for 2500Cr more than the normal ship.

to be filled in