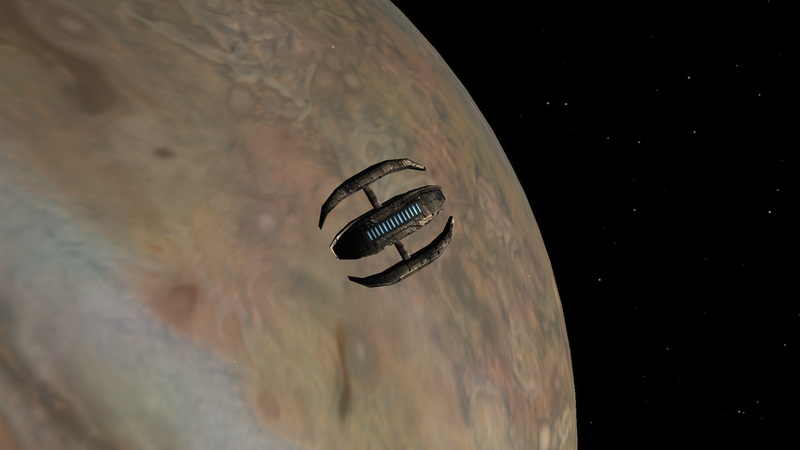 This OXP (part of Strangers World) puts into operation a network of stations, moving on circular orbits around various bodies in the system. All the stations in this planned network have specific roles and corresponding markets.

Lock your Advanced Space Compass onto a K beacon and enjoy a flight to a new destination!

If you have been enjoying regular Oolite, and wish a change, you might prefer not to read the descriptions in Features which follows - and discover them in-game! But Stranger's Overview essay gives an insight into some difficulties of programming for Oolite.

This is the case for the Satellites OXP (author – Rorschachhamster). Seemingly just a nice exercise in coding and just one more OXP in the Ambience category.

But, it is a jolly hard task to simulate true orbital dynamics in Oolite:

In the real world, the calculation of orbital dynamics is based on the integration of acceleration vectors and on the energy conservation law. If you have no acceleration produced by a propulsion engine, your total energy (sum of kinetic and potential energy) would have a constant value. So on an elliptic orbit you’ll trade velocity for altitude and vice versa.

In Oolite we have no gravity nor energy. Acceleration is limited to propulsion acceleration/deceleration parameter thrust and this is not a vector value – it is just the rate of change of ship speed. So we need some trick to simulate true orbital dynamics – calculating the ship's position for the next frame and placing the ship directly into it.

Unfortunately JavaScript is not a suitable instrument for smooth dynamic simulations! It generates only 4 fps, so you’ll see the jerky sequence of frames instead of a decent illusion of smooth movement.

Satellites OXP uses a more elegant approach, based on AI behavior. It generates a realistically looking pattern of circular movement around a planet without sophisticated mathematics.

... Let’s try to apply this approach to a large ship. Large enough to be dockable.

You've got the idea.

All stations in the network have specific roles and markets.

Kiota class stations from WildShips OXP (author Thargoid) were used as prototypes for my orbiters. Kiota stations have a modular design, suitable for assembling custom configurations. These stations have reach-through axial docking well, allowing easy closing and docking from a six o’clock chasing position. And these stations have a pretty looking appearance. Nice job, Thargoid!

It is technically possible to adjust each orbiter velocity individually to simulate orbital periods as a function of planet mass and orbit radius, but I have no plans to implement such an idea. The escape velocity in our Solar system is 2.38 km/s for Moon and 59.5 km/s for Jupiter – a 25x ratio. All orbiters have H = 0.5 R circular orbits, so orbital velocities will be in the same 25x ratio. Setting the orbital velocity of a jovian orbiter to 200 m/s to allow an Adder or Boa to dock with station will have 8 m/s for the lunar orbiter – a barely noticeably movement. So I decided to sacrifice accuracy for fun. All orbiters have the same visible orbital velocity of 50 m/s.

These are Main stations in high technology systems. They have the same configuration as the original ring-habitat stations in the Wild Ships OXP, but with different seeding criteria. These are stationary (not moving) stations, so you can save your game at them.

These planetary research orbital stations occur in high-tech systems with stable governments and a high GNP. All research orbiters except the Jovian orbiter have the same configuration.

All stationary KHS stations have the role of main system station (with F3F3 shipyards etc) as well as the usual default F8 system market.
KOS orbiters have customised markets, adjusted individually for each type of station.

Required OXP: Planetary Systems This OXP uses planets from Planetary Systems OXP as destination points for station spawn. If you have Planetary Systems missing, Orbital Station OXP still try to spawn stations but results may be negative or logically flawed (for example, you should have no research stations orbiting gas giants if you don't have at least one gas giant in the system!).

You may need the Navigation MFD to see the details of which station is which.

This package's minimum requirement is Oolite 1.82.

This OXP is released under the Creative Commons Attribution - Non-Commercial - Share Alike 3.0 license. You are free to use and distribute this OXP on non-commercial basis. Rebundling of this OXP within another distribution is permitted as long as it is unchanged. Any mods/derivatives of this OXP must be distributed under another names. The license information (either as this file or merged into a larger one) must be included in the OXP.

More strict rules for jovian and martian orbiter: no more these stations in low tech systems.