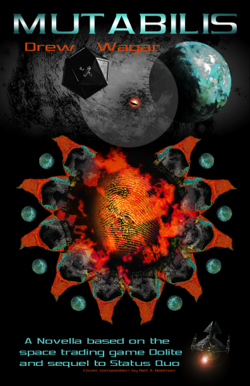 Mutabilis is an Oolite novella by Drew Wagar. It is the sequel to Status Quo and the second part of the Oolite Saga.

"When a series of linked murders forces GalCop to outlaw the shadow organisation known as 'The Dark Wheel', a mysterious top secret document must be found in order to stave off a Galactic conflict. The document contains a devastating secret; the key to power, domination and control. A secret as old as space itself, the location of the legendary planet Raxxla."

Mutabilis is set two years after the events of Status Quo, in the year 3140. This is two years before official game time of Oolite, the year 3142.

The cover design for Mutabilis was the subject of a competition. The winning entry was produced by Neil Badman and is used for both the online and hardcopy versions. You can see all the other entries below. These are also included in the online version of the story.