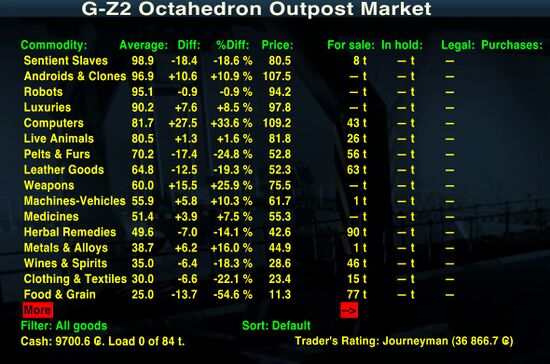 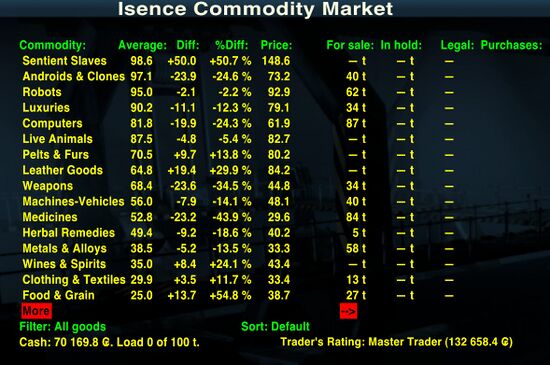 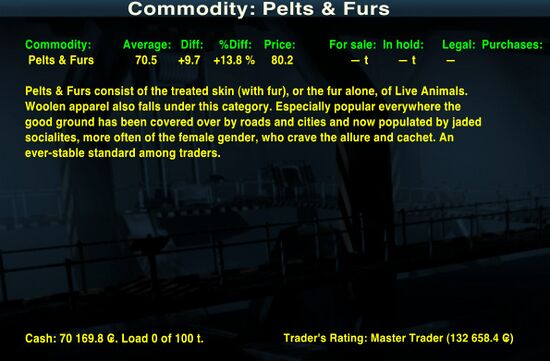 An enhanced and extended Market for the zealous merchanter. 5 (five) new commodities for industrial and agricultural economies; 10 (ten) recast display aliases for the traditional Oolite goods.

Overall goal: a balance between quantity and potential profit.

Sentient Slaves, the Galaxies' most valued and expensive commodity (and we leave ethical and moral questions to the philosophers), comprise parent-born beings of any species with a capacity for reasoning and emotion. The latter quality alone distinguishes this cargo from the near-sentient Androids, Clones, and Robots. Sentient Slaves are usually more abundantly buyable from the markets of agricultural societies. A cash-cow for harder-hearted merchants.

Androids & Clones are the near-sentient (but not legally considered so) products of highly advanced industrial societies. In the case of clones particularly, the connoisseur buyer values them only a little below Sentient Slaves. Another money-mill for traders of a less ethical bent.

Robots are the non-sentient (as adjudjed in recent court cases) neuro-mechanical products of highly industrialized societies. They serve in all sectors and in all walks of life and are everywhere greatly in demand, although from the trader's perspective perhaps not as profitable as Androids or Computers.

These luxuries - among which cosmetics and corporal adornments stand out - include what many would class as 'toys' (sophisticated ones: rejuvenators are an example), as well as objects and items 'in vogue' and considered dilettante extravagances, often for their scarcity and novelty. Such stock is usually more readily available through 'industrial' outlets. By their very ephemeral nature, prices fluctuate and 'leisure'-goods are not always as profitable as those on either side of them in the market scale.

'Computers', covering a broad base, are the unrivalled products - be they jumpdrive-modulators, workflow controllers, auto-teachers, or console devices - that underlie and drive forward a technologically advanced civilization. It goes without saying that their production and availability is always high in such societies. A shrewd merchanter, when visiting an industrial station, will snap these goods up first, so essential are they to less advanced neighbouring systems.

Our 'Live Animals' category comprises living, breathing beings legally considered 'non-sentient', sold usually as pets, mounts (planet-bound horsemen of the steppes just love their 'mounts' and 'steeds' - technologically progressive dressage aficionadas too), breeding stock, or cattle for slaughter and consumption. Animals are a special product of pastoral-based societies and extremely needful in industrial systems. Competent merchanters will usually be carrying some Live Animals in their holds.

Pelts & Furs consist of the treated skin (with fur), or the fur alone, of Live Animals. Woolen apparel also falls under this category. Especially popular everywhere the good ground has been covered over by roads and cities and now populated by jaded socialites, more often of the female gender, who crave the allure and cachet. An ever-stable standard among traders.

Leather Goods comprise items made from the treated skin, without fur, of Live Animals: footwear; gloves; clingy catsuits and pants; durable workers' and soldiers' clothing; straps and belts; vehicle upholstery; bags of all shapes, uses, styles, and sizes; the list goes on... perennially popular commodities any trader with a modicum of sense will buy without hesitation from a pastorally-based system. Prices are stable and profits can be high.

The 'Weapons' category should need no preamble. Firearms, lasers, mines, and missiles cover it generally, though rarer deliverers of ground and space death can be had for a Lave penny in some systems. A very stable commodity, always in demand. Many veteran traders consider a hold half-full with Weapons cases a must.

A reliable commodity to buy, Machines, product largely of industrialized societies, comprise mechanical devices for all sectors: Farm machinery, textile-milling machinery, production-line machinery; ground vehicles of every size, shape and colour; skimmers; shuttles; marine craft; aeroplanes. Deep-space vehicles are of course far too massive for even a medium-class trader to carry unless s/he tows them, which a few have been known to do; but to hold them is really the province of heavy-traders owning collossal Anacondas and Boas.

A highly unstable commodity, liable to fluctuate wildly in price on the fickle winds of disease and plague, Medicines - a product of the advanced pharmaceutical industries - will nevertheless be in extreme demand almost everywhere. Some merchanters - particularly Moray Starboat and Medical Boat captains - specialize in them.

A good that can vary considerably in price because its outlets are not confined to a single economy, Herbal Remedies might sometimes be what are legally considered 'narcotics', but more often comprise treated or fermented plant-matter from the multitude of systems that export it, quite frequently linked to religious beliefs, but still very popular among industrial sophisticates, who carry them from soirée to soirée extolling their benefits and virtues. Fairly stable in price and worth the experienced trader's consideration.

Metals & Alloys, as a product, straddles the poles of agricultural and industrial societies, and consequently their worth is often hard for the average trader to pin down. In demand everywhere - in both industrial and agricultural systems - Metals & Alloys should never be entirely ignored as a barterable item. A useful filler for any hold.

What system would be without its favourite tipple? Some merchantmen have seen queues of buyers forming onstation before their ship even clamps umbilicals and opens its seals. One of the most reliable goods in any galaxy to carry from an agricultural to an industrial planet, and ideal mass-wise for the light-class or neophyte trader.

Fabrics & Clothing covers (pun intended) a megaverse of styles, hues, weaves, textures, and weights. A staple, like food, clothing requires no recommendation: as a good, it recommends itself - especially to the light-class or neophyte merchanter. And, like food, extremely stable in price, and a guaranteed profit.

The Galaxies must eat. They must also drink fresh spring-water (and milk, which the category includes). This is food for sentients and fodder for animals - the commodity everyone begins, ends, lives with, and dies without, and every trader has carried it at one time or another, for its price stability, abundant availability, and guaranteed gain.

The fruit of mining, on any planet in any system at any technological level, this second-cheapest of goods might be worth considering when starting out on a trading career. But beware the unpredictability in price!

A waste industrial product, Radioactives, legally deemed *most hazardous* is for the intrepid (or desperate) trader only. Those starting out have, however, seen success carrying this commodity on their first runs.

None of the More Moolah goods are illegal or restricted. (this is a G.E.T.-sanctioned market and Galcop has no oversight.)

By default the commodities are sorted by price (descending) on the Market screen. This is to make selection of the more valuable items easier and quicker.

You are advised to start new commanders once More Moolah has been installed. In fact, a fresh Jameson is recommended after every new version of More Moolah, since the numbers continue to be twiddled with to promote the market's overall goal. And ghosts from the 'old market', when loading from games saved under the ancien regime, still skew and distort the new market considerably. (Thanks, devs, for persistently failing to address Oolite's most glaringly awful bug!)

MM is not, and never will be, an integrated part of Elite Trader Meta: they are completely separate domains of work. But the two do play very nicely together!

More Moolah is available in the Mechanics section of Oolite's in-game Expansions Manager, or here:

Just drop the OXZ into your Oolite->AddOns folder.