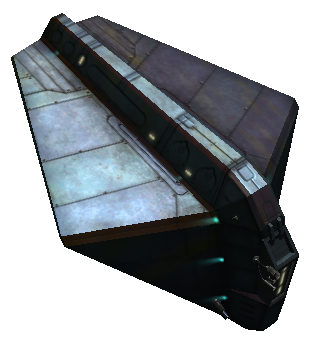 For every purpose there is a ship, and for every ship there is a purpose. If you wanted speed and firepower, you should have bought an Asp; if you wanted to haul cargo, then a Python or a Boa or even an Anaconda according to the depth of your account. But there are some who want to see not only the void between the stars, but every inch of a planet where life can survive – on land, in the air, even in the depths of the sea.

Sometimes you would like to ship cargo through channels that GalCop does not approve and that a Coriolis Station does not service. That does not make your customer a criminal, nor even a rebel – though perhaps a political undesirable. Sometimes it even makes him only an inconvenient indigenous species, and you may find that your sympathies lie with them rather than with the planetary rulers.

Or then again, you may be above such concerns, and wish only to go wherever inventive ingenuity can make it possible, and see everything that can be seen. For that you need a true triphibian – for space, for the air, and for the ocean. And you begin with the last of these. The vacuum of space is a trivial hazard, and atmospheric friction a mere detail, considered against the need for a hull with the integrity to endure an environment formerly considered the preserve of specialist science vessels. When you have a ship that can endure almost uncounted tons of pressure on every square metre of its surface, you know it will never let you down when exposed to the trifling differential imposed by a mere lack of air outside.

Then, while your cargo space may be smaller than some, you have enough to ship a few tons of essentials, to say nothing of more compact consignments. Also, you can equip yourself with more weaponry than some would credit, and shields to the highest specifications, and whatever energy units the powers that be might grant you access to, and in short, if you cannot outrun or outfight everything, you can make yourself about as unpleasant as you would ever need to, should the need arise –

Or you can turn your back on the whole silly business and take an extended sojourn up to ten kilometres below the waves, simply for the pleasure of seeing what perhaps no-one else in two thousand worlds has ever seen; and to your voyages of many light-years across the galaxy, you can add one of perhaps eighty thousand kilometres in the depths, such as my Ship of Pearl has made. And for that there is only one sensible choice:

When a spaceship is free to go under the sea, that’s a Moray.