Difference between revisions of "MSX Elite" 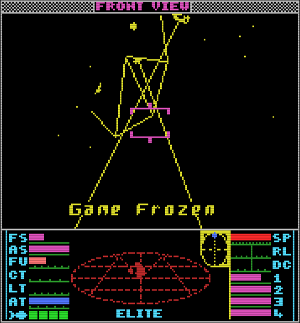 MSX was an eight bit home computer standard in the eighties. There were four generations, MSX1, MSX2, MSX2+ and MSX Turbo-R. MSX1 computers had a Zilog Z80a or equivalent CPU at 3.5 Mhz, 64Kb RAM, a 3-channel PSG sound chip and 16 colours in 256 by 212 pixels.

MSX Elite was programmed by Rob Nicholson of Mr. Micro and released by Firebird in 1987. Although the MSX2 standard was already a year old then, the game was made for MSX1. It came in two versions, a tape version and a disk version. The box and the manuals that came with it were actually for other versions. Through the sticker reading 'MSX' that was on the box, 'ZX Spectrum 48K' could be read easily. The manual mentions the Fer-de-Lance, which does not appear in the disk version of the game, and omits many that are. The screen shots do not correspond either. The screen shot on the back of the box is in black, white and pink, while the MSX version uses 16 colours.

Your Elite rating depends on your score. Depending on the ship you destroy, you get between 3 (Orbit shuttle) and 150 (Thargoid, Wolf Mk III) points. Since you need 2,000 points to become Mostly Harmless, this will on average require 27 kills. Although other 8 bit versions require much less kills, the amount of points needed follows the same pattern (Poor is twice Mostly Harmless, Elite is 2 and a half times Deadly, and so on).

The MSX Elite universe contains 19 different types of ships, as well as space stations and asteroids.

Speed is determined by chasing them for a while. Units are vertical bars on your ship's speed indicator.

The cloaking device is obtained by completing mission four. It doesn't really appear to make you invisible though. If it did, ships wouldn't go out of your way to prevent collisions (they do) and firing at them would give away your position (it doesn't). Ships will just stop firing at you until you disengage it. The cloaking device uses energy from your energy banks.

The ECM jammer will prevent ships from using their ECMs, so you can take out a Wolf or a Thargoid using a missile. Space station's ECMs seem to be impervious to it, though. Like the cloaking device, it uses energy from your energy banks, so using it in combination with a cloaking device is very costly.

MSX Elite has five missions. According to Ian Bell's Elite FAQ they are triggered when the player reaches a specific number of points. In my experience, the numbers in the FAQ are incorrect.

A navy ship prototype has been stolen. You are to find and destroy it. First you must follow directions given to you after landing at each station you visit. This goes on for some time, after which the instruction will read: "There is a mean and vicious ship out here." After you take off, you will be attacked by a Constrictor, the prototype ship in question. Destroy it using your lasers.

The navy has obtained blue prints of a Thargoid battle ship. You are to transport these documents to a navy base. You will be told that you won't be bothered by Thargoids, but you will.

The sun of the system where you happen to be will go supernova. You are to help evacuating the people, which you can only do using a galactic hyper drive.

This is more like a special event than a mission. After emerging from hyper space you will be attacked by a Cougar. The Cougar is equipped with a cloaking device which makes it invisible to your eyes as well as your radar. After destroying it pick up the cargo canister it leaves behind. It will contain the cloaking device.

A system has been invaded by Thargoids. They are using a space station as their base. Fight your way through the Thargoid fleet and destroy the station. Dock somewhere else to collect your payment.

Pirate and Thargoid attacks are always announced by your console saying "condition red". Thargoids always attack solo. Pirates attack solo or in groups that seem to get larger in the higher numbered galaxies. Attacking ships will fly toward you and start firing as soon as you are in firing range. Their fire power is also greater in galaxies with higher numbers.

Slow moving merchant vessels like Anacondas and Cobras can sometimes get in the cross fire. Firing at them by accident will make them start actively chasing you and firing at you. It takes a lot of time to get rid of them and every time you're attacked by a new group, they're there again. Destroying them may be your only option but will ruin your legal status.

Try to identify your attackers. They all carry the same kind of beam weapons, so target the easiest ones to destroy first. Typically these are Sidewinders and Mambas. If there are Wolves or Asps in the group, actively get out of their way, because they will almost always turn too late and crash into you. If you have the fire power and a cloaking device, stopping dead in space is the easiest way to avoid collisions.

If you own an ECM, save any Boas for last if possible. They usually carry two or three cargo canisters and it is easiest to pick them up if you're not being fired on.