The purist school is thus split between ultra-minimalist purists who pretty much reject everything apart from the games themselves (ie, the code!) and the moderate purists who accept the Manual and The Dark Wheel etc. See for example, Disembodied's view here (2008). 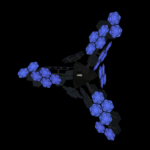