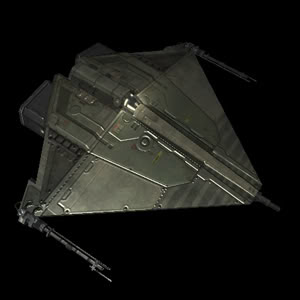 There are faster ships, there are tougher ships. There are ones that are bigger, carry more missiles, or are just more manoeuvrable. There are even ships that outclass it in almost every department there is, but there's just something about the Krait that the others don't have.

The Krait isn't the oldest ship out there, not by a long shot, but since the Mamba came on the market, the Krait is no longer mass produced. The Mamba is a better ship in many ways, certainly faster and with a sleeker profile but if you asked any of the Krait owners I've met, they wouldn't trade. Maybe it's the classic wedge shaped profile, with the two forward facing prongs giving the impression of a visored medieval knight, lance pointing ahead, ready to charge. Some talk of the Krait construction holding up better under fire, with less plate stress at the nose and superior shield placement. What is true, and it surprises a great many, is that the Krait remains the more maneuverable of the two. It's also easy to underestimate the psychological impact one of these things delivers when it's bearing down on you, few other ships look so intimidating.

The bridge isn't very fancy, very much a case of function over form but it does have a simplicity to it that soon feels quite intuitive. Looking through the cockpit, whether toward the nose or either side gives a sense of protection and security that you seldom feel in narrower vessels. It's not like a being in a Fer-de-Lance where doors glide effortlessly into place, fittings are streamlined and having a quick sleep in the cockpit would mean you awake more refreshed than after a night spent in most hotels. No, not at all. The doors on a Krait make a satisfying 'clunk' as they secure themselves into place. The metal floor plates rattle noisily as you walk around what little space their is. Sleeping in the cockpit is likely to mean waking with half of the control deck impressed into your face. Seldom will you feel more secure however, surrounded by sturdy looking fittings within a large yet one man craft, it's like being one of those great shelled lizards that can withdraw their head and limbs into their body... you know the ones... oh what are they called... they have them on that place I've just come from... Too much hyperspace messes with your brain, I'm telling you.

For a ship marketed as a 'one man fighter' the Krait is huge. The original model could carry ten cargo pods, pretty impressive for a 'fighter'. You seldom see one with that kind of hold space these days but it retains it's impressive scale. A child of the 'lone wolf trader' age, it was never meant to be an escort, rather self sufficiency was the order if the day and the Krait lived up to that ideal better than most. It's one great Achilles heel in that regard was the lack of a hyperdrive, not an uncommon omission on smaller ships but for one this size, even back then, it seemed strange.

It's getting harder and harder to find parts for these ships and owners can expect maintenance costs to rocket at some point in the future. Seen by many as a poor man's fighter, this ship doesn't appear to have all that much going for it, but wait until you fly one. Very agile for its size, with a profile that truly rewards roll-based maneuvers. Although it couldn't be called fast any more, that lack of real speed just seems to heighten the sense that the ship is under your control - in the hands of an experienced pilot, it is a joy to behold.

Now a classic target for amateur 'ship spotters', the famous profile, graceful flight, dynamic styling and not inconsiderable bulk, make it a splendid and increasingly rare sight in the space lanes; the spectacle of one coming in to dock at a station seldom fails to turn heads. Several times I've seen engineering teams drop whatever they've been working on for a chance to tinker with one of these beauties. Beauty might seem like an odd term for something as robust as a Krait but engineers always did have their own particular sense of aesthetics and the Krait fits them very well. 'Simplicity is genius', so said someone or other and whoever designed the Krait must have been listening as it gets every single one of the basics right. Maybe it's the extra room on a vessel this size or the simple fact that the Krait isn't trying to be anything that it's not. Sure there's room for a hyperdrive but not having one means you can work on every major piece of kit this craft can carry and not have to remove anything more than a maintenance hatch to do so. That's increasingly rare these days. I've known a lot of engineers whose dream vessel is a Krait, simply because they can do almost all the work it could possibly need on it by themselves.

There are tales of Kraits out there with a forward laser mounted on each prong, causing even hardened pilots to flee and thank their stars that the Krait isn't the fastest. I've never seen that myself, but there are certainly stranger things throughout GalCop space, and Krait owners are often eccentric enough (and stubborn enough) to go to great lengths to customise their pride and joy. Military Shields are not unheard of on a Krait - show me a Mamba fitted with a set of those!

Whilst it remains a ship that could really do with a few upgrades for it to compete with the best in its class, for its biggest fans the Krait remains in a class all of its own.