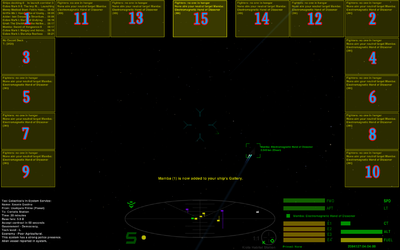 I said, "No; the best game ever was Elite -- the only game I ever played continuously from the time I woke up in the morning until the time I went back to bed that night." I proceeded to look for videos online of the C64 and Amiga versions which I played, to show him what I was talking about (not that a 20-something kid would be thrilled by graphics from over a quarter century ago). In the related videos, I saw an Oolite video.

I've had it for a few days now, but have hardly played it because I spend all my time tweaking things in it -- from editing textures (I did a lot of that in the racing simulator rFactor, even making an alpha channel tutorial video because I was so tired of continually trying to explain to people how to fix their reflection maps), to editing sounds, to editing an OXP to remove bits that were superseded (the Z_GrOovy_System_Stations seemed to undo the latest Griff stations, but it did have the new Octohedron and Tetrahedron designs, so I edited it to make it only include those), and even designing a new store parody sign and (default thus far) Sidewinder security ship for the Constores add-on.

Eventually I'll stop tweaking things and get around to playing! Unfortunately my old joystick's Z axis is very noisy so I'm constantly having to correct my yaw (using DXTweak, which only helps DirectX readings so doesn't help with the raw data Oolite reads, I'd have to set the value to a whopping 15 percent on that axis before it stops jittering), but I can deal with that, except when I try to pitch over 180 degrees and discover I had turned 90 degrees in the mean time!

My wife has already complained to her friends that I get home from work and go straight to fiddling with Oolite, then go to bed later than I should.