Difference between revisions of "Graffiti Asteroids" 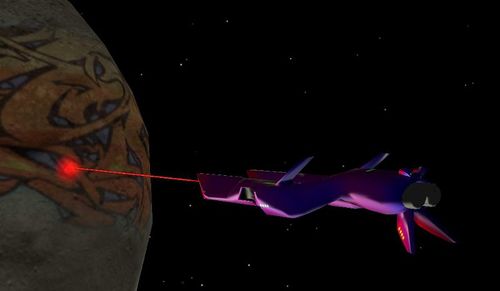 "Asteroid-tagging" or "Lane Art" is a highly disputed art form involving the marking of asteroids or other objects in space, and may range from simple words or written letters to huge and elaborate paintings or even murals that may be kilometres wide. It has it's origins in the much smaller graffiti once done on dirtside buildings and objects.

The most commonly used material in modern times are the laser activated polymers. A few "Lane Artists", however, also use much less specialised means. Some prefer actual EVA suits and chalk or other simple pigments, but more often, the name of the game is to get done quickly, to avoid unwanted police attention. Laser polymers allow this and also provide a wide palette of colours and even patterns that can be used with some of the art software used to control the laser.

The legal aspects of Lane-Art are somewhat vague, since asteroids are the most common target and in most cases asteroids in or near the space lanes are not considered to be the property of any particular individual or corporate interest. Some astro-taggers have been apprehended and arrested, but since anyone with a desire to do so can mine or destroy an uninhabited asteroid, the usual legal defence has been that graffiti can't "deface" an object that is legally considered a mild nuisance in the space-lane as is evidenced by the small bounty paid for eliminating one.

Not everyone agrees with that viewpoint though, and in some systems the residents are calling for legislation to ban or at least restrict the art-form since they consider it to be an eyesore or likely to adversely affect the tourist trade. At this point in time, however, only a very few systems have enacted any such laws.

While the tagging of asteroids may be legal in some places, at least at the present time, defacement of stations and other items is not. In a recent case involving an attempt to tag the observation station at the famed Tianve pulsar, the perpetrators were immediately set upon and destroyed. When the legendary Elite combateer, Rebecca Weston, was asked if her patrol may have used excessive force, she replied:

There was a recent case in the Atbitela system where an asteroid-tagger successfully sued a miner for destroying an asteroid on which the artist claimed they had painted their final entry in a system-wide annual art competition. The miner is currently appealing the court's decision.

So, some consider it beautification while others consider it an eyesore, but Lane Art is rapidly increasing in popularity. Even the most conservative systems may have the occasional surprising bit of colour, humour, or rudeness from it these days. Considering the number of individuals outfitting their ships with polymer dispersal rigs and art laser systems, it seems likely that this new "Lane-Art" will be with us for some time to come.

This OXP is a community project, if you want to get involved post your tag Here

Special thanks to Ganelon for providing the back-story

Place the .oxp folder in your Oolite AddOns folder, and hold down 'Shift' until you see the spinning Cobra when you start the game for the first time.