This classic .oxp is not on the in-game Expansions Manager for licensing reasons (see Links at the bottom). 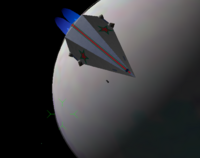 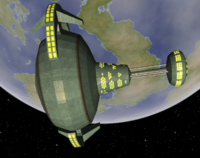 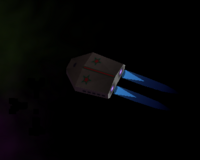 The Galactic Navy OXP introduces a more visible Galactic Navy presence to the Ooniverse. Each galaxy now contains 14 individual Sector Commands with base systems and stations. There are several new navy ships and navy patrols including Navy Carrier Groups, frigate patrols, and convoys. Once docked at SecCom stations players have a variety of options to choose from including Navy Reserve missions.

Original idea and earlier versions were created by matt634. Version 5 was released by Nemoricus, with Behemoth battle group code from Commodore Eric Walch and other assistance from Thargoid. Special thanks to Screet for playtesting.

This OXP also adds 14 individual Sector Command Military Stations to each galaxy in orbit around their home planets. At SecCom stations a player may check incoming news, buy victory bonds to support the Navy, or sign up for reserve duty. All pilots with at least a competent rating are eligible for reserve missions. Players may track their status on the interactive Reserve Leaderboard.

This OXP adds Carrier Group Patrols, Navy Frigate Patrols, Emergency Medical Transports, and Navy Transport Convoys to the space lanes as well as increasing the action of interstellar space battles.
Finally, this OXP adds a one time Special Ops mission to Galaxy Six. Players must be docked at a SecCom station and have flown at least 10 reserve sorties. A save file is included for mission testers. There is a walkthrough where you can look for hints if you get stuck.

This OXP requires the Behemoth OXP to function properly.

Installation of the Galactic Navy Facelift is recommended, as it includes shaders updates for the graphics.
All Update Notes can be found in the Readme included with OXP
See the BB Thread for updates and latest news

Some versions of this OXP are broken for the AppleMac. To fix one of these, try the following:

(which appears 42 times, followed by a number and then </integer>).

You will now see the Navy stations, frigates, etc. You can dock, buy Victory bonds, see the latest war updates, sell into the market...

See How to tweak OXZ's if you need more detail

Note that at this early stage in the development of Oolite, the Oolite community mostly followed the syncretist approach to Lore, placing Oolite between Classic Elite and Frontier historically, which meant that GalCop was doomed and the incipient Federation & Empire needed to be accounted for.

This OXP was written by Matt634 in legacy script in 2007. It was updated to Javascript in 2009 by Nemoricus. He had permission from Matt634 to do this. Matt634 was then swallowed up by witchspace and no proper license has ever been received to allow updating of this OXP and posting on the Expansions Manager. To do so would involved rewriting this OXP from scratch. Nemoricus was on the Orbiter Forum back in Summer 2020.

The real effect (unless you enlist and go for the missions) is on arrival at the Sector Command planets, which now have a major navy presence. Take Isinor, for example. Without this oxp, there is a good chance of getting scragged by pirates on arrival at the witchpoint. With this oxp, there is a better chance of seeing pirates being scragged by the Galactic Navy instead! The navy base also has a top notch shipyard doing excellent maintenance work and with a full range of equipment. Rather expensive, though!