For the hurried Commander on the go! No time to dock, just want to grab some fuel and run, then this is the place for you...

To grab some fuel, just fly into the yellow glow in the centre of the station and come to a halt. Your ship will notify you when transfer begins and when your tank is full (and if you run out of cash during the transfer, sorry no credit will be given to broke Commanders). Then just fly on out, check your summary receipt and carry on with your journey.

Stations are limited to tech levels of 4 and above and will not appear in Anarchy or Feudal systems. Not every system has them, but some have at both the witchpoint and half-way between the witchpoint and the main planet to fill-up on Route One. To find one quickly just look for the fuel pump icon on your ASC.

Oh and these stations are solidly built, but aren't designed for big ships (no Dredgers!). And Galcop don't take too kindly to acts of laser vandalism on them...

Following reports from some of our more *ahem* militant customers, plus a quiet word from the Heavy Haulers Assoociation, a new fuelling satellite has been introduced to some systems. This works by simple proximity, all you need to do is fly to within 150m of it for fuelling to begin. This should cover all but the biggest of ships, which will need more fuel than the satellite can give and should have enough space to carry their own damn fuel anyway!

The satellites appear in much the same places as the general fuel stations, and also carry the same "F" / pump beacon on the ASC.

And with thanks to Eric Walch, v1.12 now has NPC trader usage for the fuel stations too, for added atmosphere. 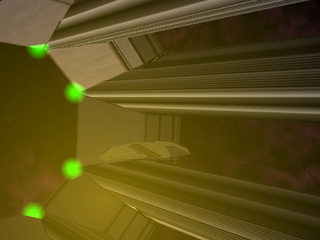 A recent invention from AOO Solar (a publicly traded company based on Gearzaen, GalChart 3), the SWAFT, is described as ‘A revolutionary advancement in modern fuel scoop technology,’ by Farfelnel Aessiq, AOO Solar spokes-rodent.

“We are proud to announce the widespread availability of the Solar Wind Automatic Fuel Transfer Station (SWAFT) - our industry revolutionizing station. Our reward of the GCW contract for the immediate installation of SWAFT stations throughout the Galactic Charts will change interstellar travel and commerce as we know it.”

He went on to explain the operation of the station is based on a patent-pending, super-efficient fuel scoop system similar to that used on modern spacecraft. The station operates the scoop continuously, gathering minute traces of Quirium pushed out by solar winds. This small amount of quirium is too small for ship-mounted, general-use fuel scoops to recover. The station uses an ultra-efficient design patented by AOO Solar, and must operate continuously to gather the necessary fuel. When a ship enters the station, the station’s fuel scoop system is reversed, thereby, dumping large concentrations of fuel directly into the scoop intakes of the awaiting vessel. If the vessel does not have fuel scoops, a slightly slower direct transfer system is employed. Details of this system were not released.

There were some chuckles following the engagement from less reputable news reporters when one member of the press corps asked if the shape of the new fuel station was inspired by a device, known as an exercise wheel , created by humans for pet rodents. The AOO Solar spokes-rodent, a member of the native Gearzaenian species, declined to comment.

A spokes-representative of DTP Design, who manufactures the Fuel Collector under military contract, commented that AOO Solar might be infringing on existing DTP Design intellectual property rights and the possibility of future litigation when contacted by this reporter. An AOO Solar spokes-rodent was unavailable for reply at this time.

The populator script can now directly be tweaked to change the spawning positions of the stations/satellites. For details, please see the OXP readme.

This OXP is available in the extension manager in the game, or by clicking on the following link: Fuel Station 2.2.

On the one hand, one can refuel right there at the witchpoint! On the other hand, the pirates know this...