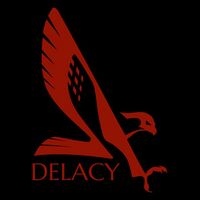 Originally known as Faulcon Manspace and currently based in Reorte.

Well known for having acquired sole rights to the production of all missiles.

They have seen numerous acquisitions of companies including:

In 2762, Faulcon Manspace won the contract to design a police ship, and created the Viper, which was to earn the company a large amount of money and becomes the standard GalCop Police ship. The design is sent to all shipyards on medium to high technology worlds for immediate mass production.

In 2888, Faulcon Manspace purchased Prossett and Salem to get into the lucrative 'one man trader' market, and they acquired the Cobra Mk I from that takeover.

In 2982, the Galactic Navy contracted Faulcon Manspace to design a multi-purpose support craft for their need for a fast and manoeuvrable forward reconnaissance craft. This ship became known as the Sidewinder Scout Ship. The design immediately becomes very popular with space pirates.

In 3034, a merger with deLacy ShipWorks of Inines, who manufactured the Krait, saw them change their name to the more familiar Faulcon de Lacy.

Following the debacle of the Cobra Mk II, they sub-contracted the Cobra Mk III to Cowell & MgRath Shipyards of Lave while they replaced their entire R&D department. One of the former chief designers ended up moving to Lerelace and founding the Taranis Corporation.

In 3113, Faulcon de Lacy purchased Cowell & MgRath and brought the Cobra Mk III back in house.

In 3126, Faulcon de Lacy purchased the Zorgon Petterson Group, the designers of the Fer-de-Lance.

Faulcon de Lacy's recent replacement for the now aging Viper, the Viper Interceptor, could be a big earner.

In the early 3100's, the Fer-de-Lance becomes a favourite with bounty hunters, but becomes outlawed in the late 3100's due to its overuse by pirates, During this time Faulcon de Lacy's corporate headquarters was moved to Olympus Village on Mars in Sol.

In 3195, Faulcon de Lacy designs and manufactures the Eagle Long Range Fighter, and made a lot of money from sales of if the Eagle and its succeccors the Mk 2 and Mk 3.

In 3248, Building on the success of their hugely successful Viper, Faulcon de Lacy once again broke into new ground with the release of the Viper Mk II Weighing in at almost twice the weight of the original, the Mk II has improved forward and retro thrusters yet comes with a similar price tag.