Difference between revisions of "Escape Pod"

The Escape Pod is a lifeboat. Normally, it is fitted such that it completely encloses the flight deck of the ship on installation, so when the crew needs to get out of Dodge fast, they just hit the button - no inconvenient running around to the escape system when a mere second could mean the difference between life and death.

Unfortunately, survival is not guaranteed by an escape capsule. Assassins, for example, will see it detach from the stricken spacecraft and will destroy it. Pirates will probably try and pick it up in their fuel scoop and then sell the crew to slavers. In interstellar space/witchspace there is no-one to rescue you. Despite these risks, the tiny craft has saved countless lives since its introduction, and generally it is worth carrying one.

Typically, insurance can be purchased with the capsule so a replacement ship can be assured should an unfortunate crew need to bail out of their ship. This insurance almost never covers cargo. It does cover any improvements to the ship which were made prior to its loss (but see some of the oxp's below).

Escape capsules have also been used to jettison an inconvenient criminal record - it is trivially easy to fake one's death and make off in the capsule, as with the radio shut down, the pod is very difficult to detect. One can then restart under a new alias elsewhere, GalCop knowing that the old criminal is dead!

It should be mentioned that spacesuits and RemLock masks provide other alternatives to the Escape Capsule. They do not automatically come with insurance, though.

The Escape pod has a size of 7x6x6 meters (WxHxL). Its small engines give it a maximum speed of 0.05 LM and allow for 0.5 roll and pitch maneuverability. There is only room for 1 energy bank and its recharge rate is rather poor at 2.0.

Press Escape twice on your astrogation console. The rest of the process is entirely automated. 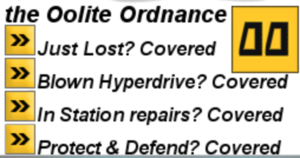 Other forms of rescue