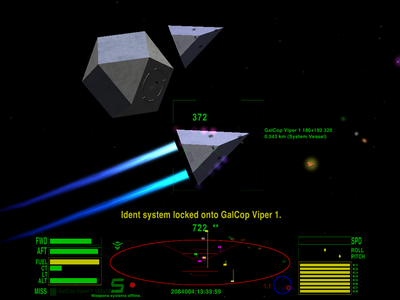 This equipment can show useful informations in the target mark after the ship name in the order of appearance:

The * mark before the name means Offender status, ** means Fugitive. 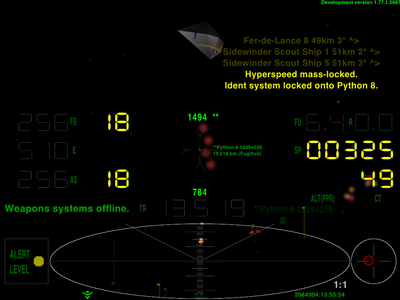 The energy detection is not always accurate, differ more and more often if the target has high version number. If detected more than the real value then you maybe flee from a weak ship or can destroy it before the value run out. But if detected less then the target will be remain after reached 0 and "???" displayed instead of the value.

If you attacked a ship then show the combined armour, shield and energy level in one number before the name to reduce reading time and indicate that you already attacked this target. The armour and shield counted with facing value so you can see sudden increases when the target turn and show an undamaged side. Before the value a + sign means the target is facing you, a - sign means facing to the opposite direction (show the back) so can not fire to you if has not aft weapon. 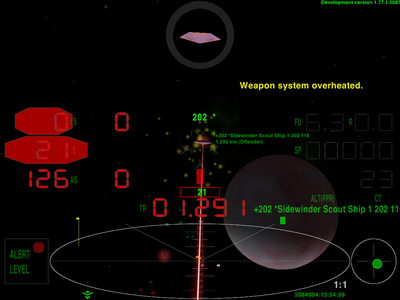 The combined energy value of your ship and your target are displayed on your HUD (Heads Up Display). This works automatically with the default HUD only, if you using custom HUD then insert the content of the insertintohudlegends.plist file into the legends section of your hud.plist to see this or you can read the values in the name of the target only.

The combined energy+armour+shield level of your ship is displayed below the crosshairs without equipment also due to your data are available without detectors and of course always accurate.

If you switch to the aft view (F2) then count aft shield and armour (if any from IronHide OXP and HardShips OXP). Side views using side armour values from HardShips OXP and the average of the forward and aft shield. Shield capacitors from ShieldEqualizer+Capacitors OXP are counted also.

If this sum is lower than the 50% of the maximum then a yellow box warn you around the value which can turn to red if the value dropped below 25%.

Your legal status is displayed also with * or ** if not clean.

You can set the position of these displays to 4 predefined place in detectors.js: Top, Down, Above or Below crosshairs by set $Detectors_HUDPlayer and $Detectors_HUDTarget to "T", "D", "A" or "B". If you using NumericHUD v3.1 then suggested to change HUDPlayer to "B".

The Detector will send a message when an attacker hit the player with the direction and name. If the shield of the player is depleted then the damage amount from the first hit also shown in the front of the message. You can find out the laser type from the amount: 15 means Beam, 23 means Military Laser. If you see a number around 300 then a missile hit your ship, in this case you can read the name of the launcher. To avoid repeated messages one hit reported only from an attacker in every 5 seconds, except big damages (over 50).

If Detectors are damaged, or installed HardShips OXP and the Core of the ship is damaged then you will see "???" instead of values until repaired - it is not a bug, it is a feature. :)

You can choose discounted repair if damaged but the accuracy of the detection will be decreased. 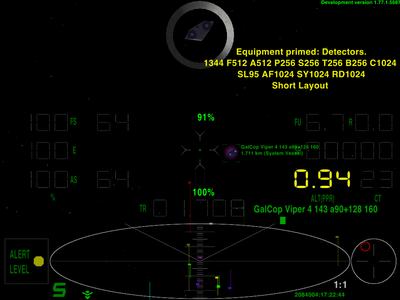 If you prime and activate the Detectors Equipment then get a message about the forward ASE of your ship (means Alberta Stock Exchange or Armour+Shield+Energy as you wish) then all armour levels after the starting letters of the sides (see in HardShips OXP), then the Service Level of your ship. The shield including the value of the capacitors if a Shield Capacitor installed from the ShieldEqualizer+Capacitors OXP.

The mode button change the information level displayed in the name of the target to choose your beloved mode. You can see the Long Layout by default but sometimes (in combat) the less is more. The on-HUD displayed values will show percentage in short layout. The target percentage calculated from the ever detected maximum value due to the true maximum is not detectable in real.

If NumericHUDv3.1 is installed then the Short Layout can change the shield and energy display to show percentage. Change it in the game instead of in script settings: set the short layout before combat and turn back over the battle when you have more time to read the exact values.

Using Detectors 0.9 and Telescope 0.9. The first five with the default HUD, others with NumericHUD v3.1. 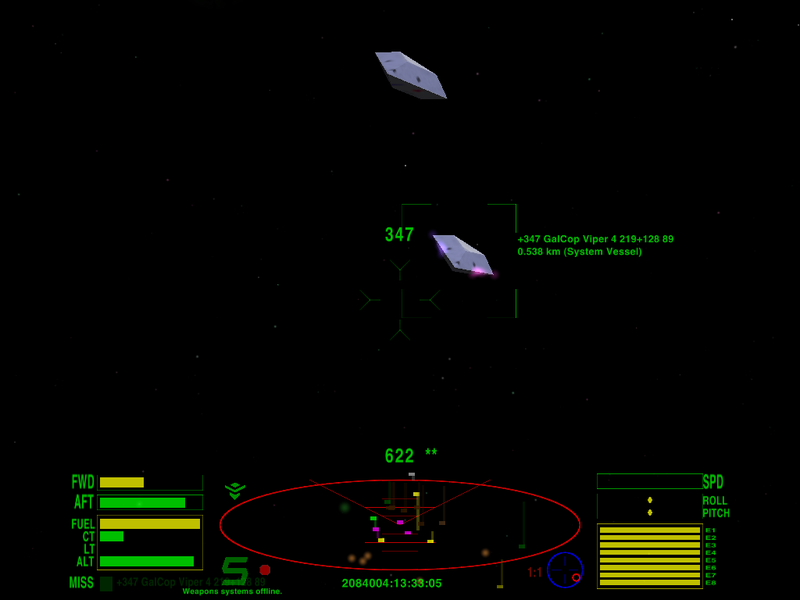 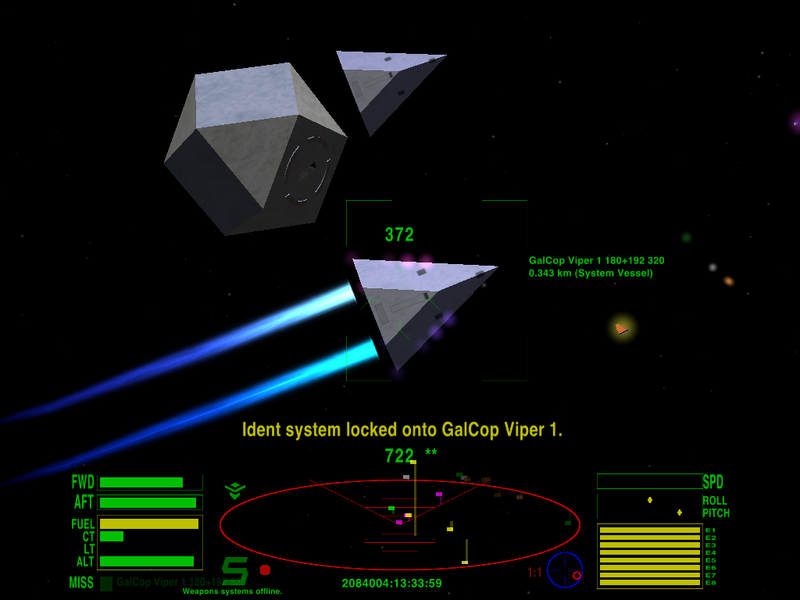 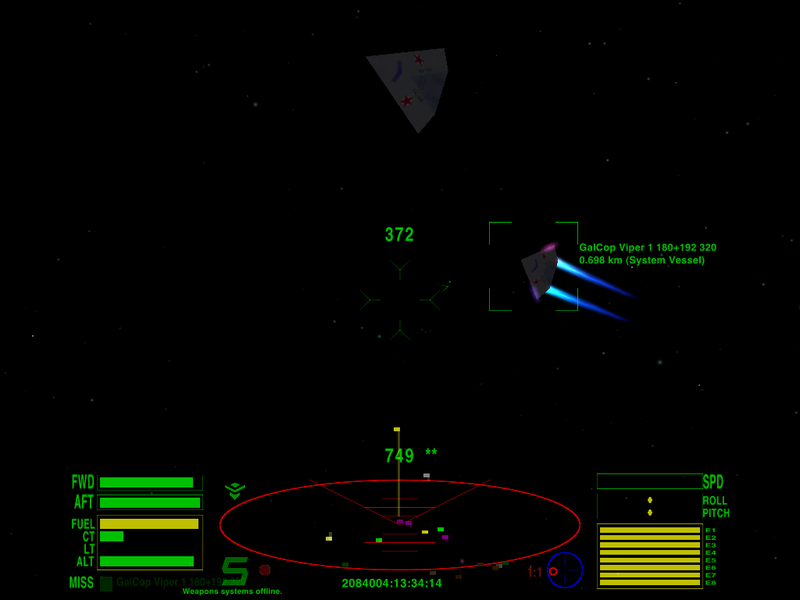 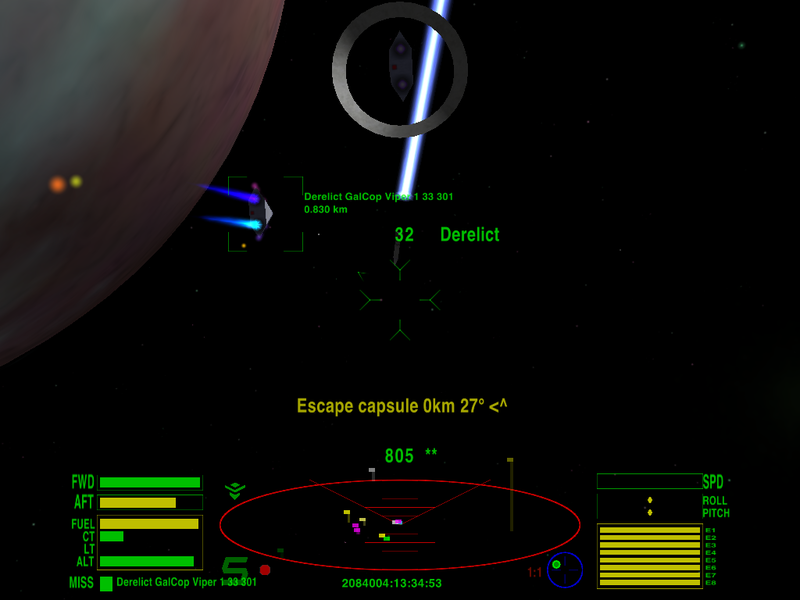 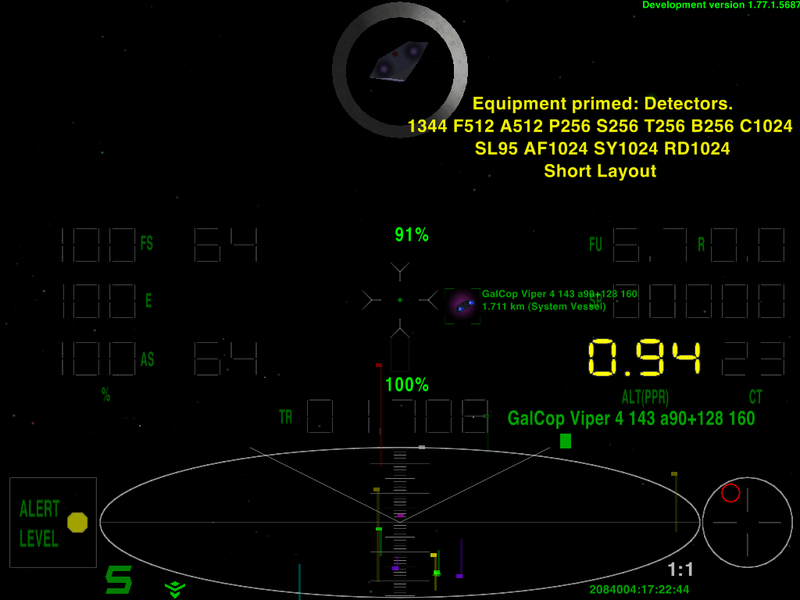 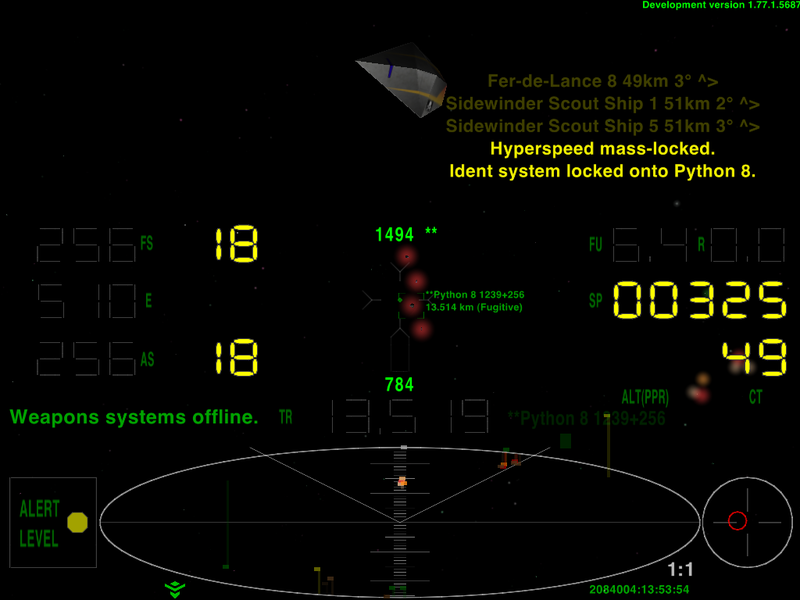 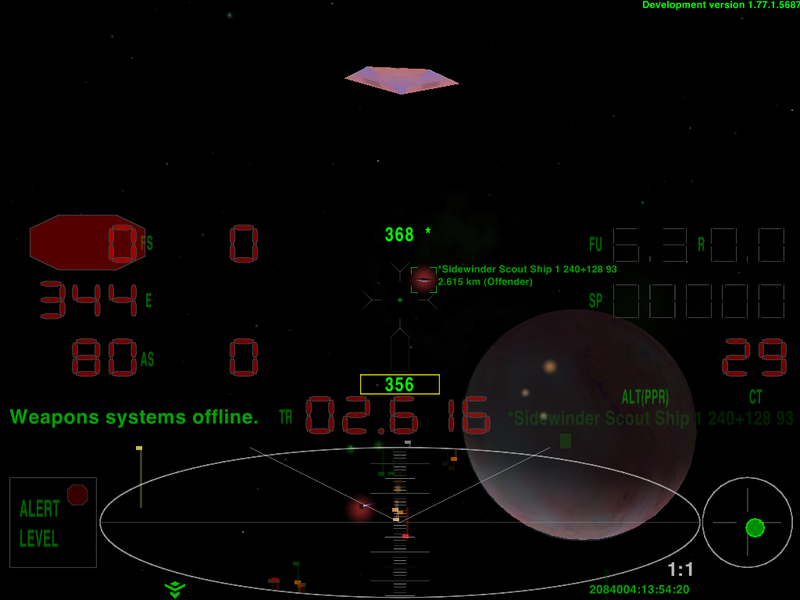 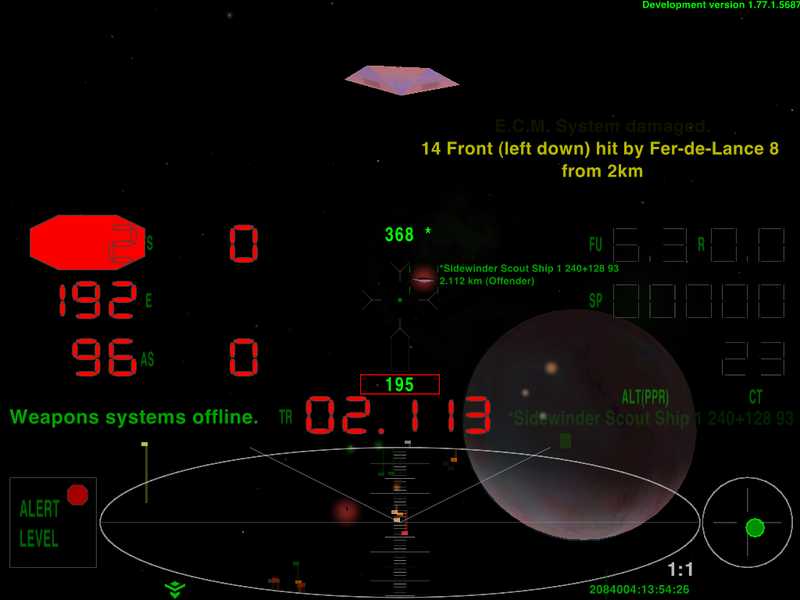 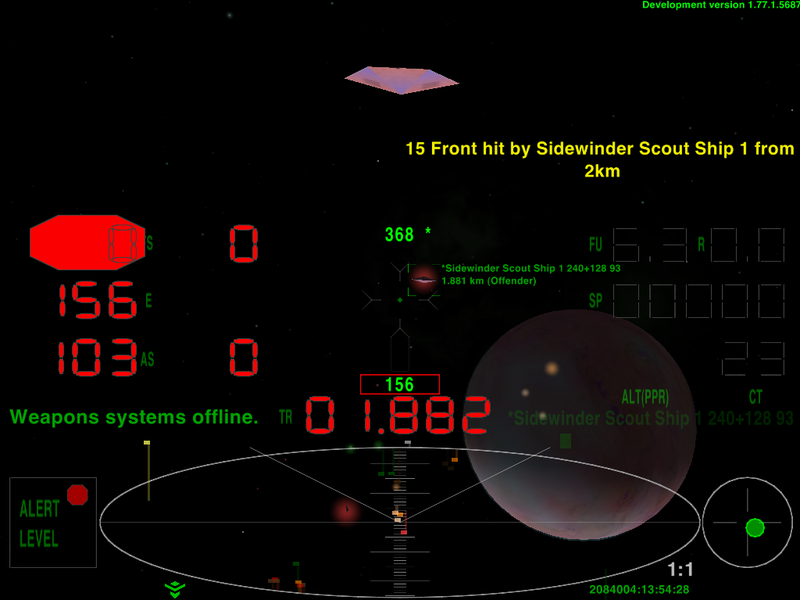 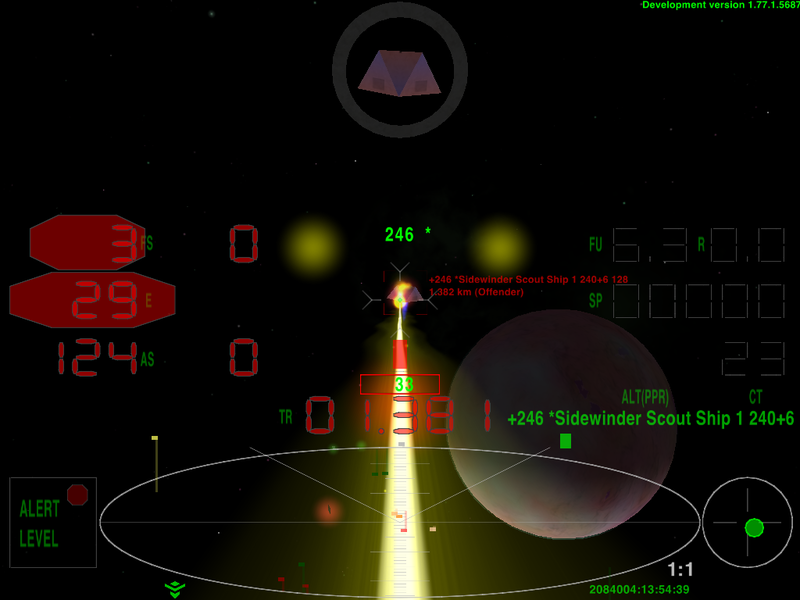 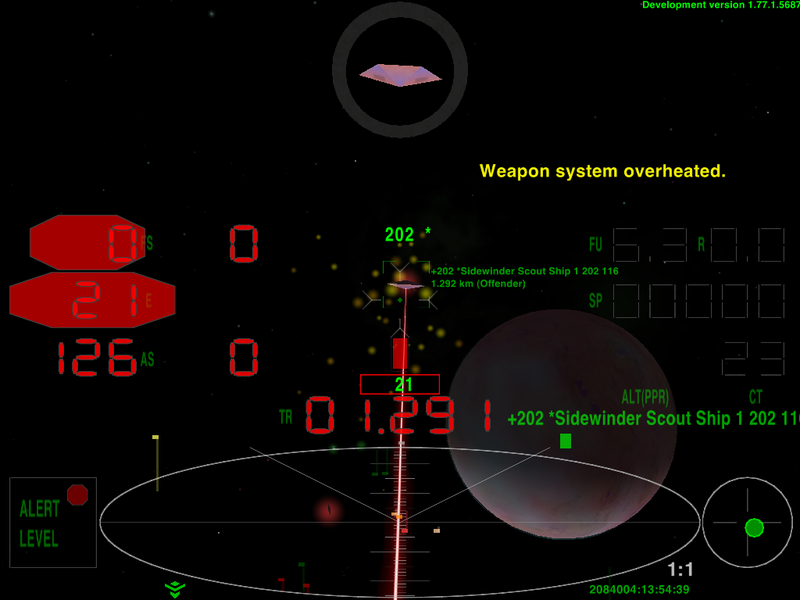 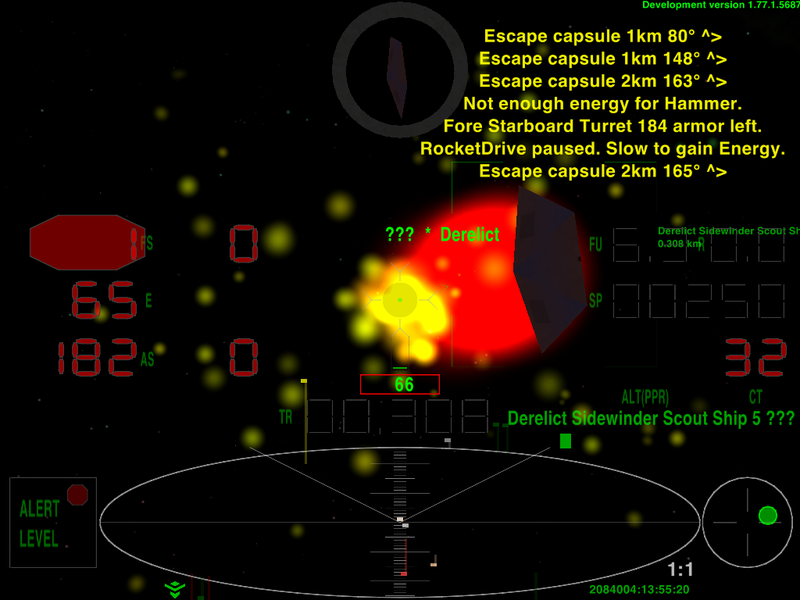 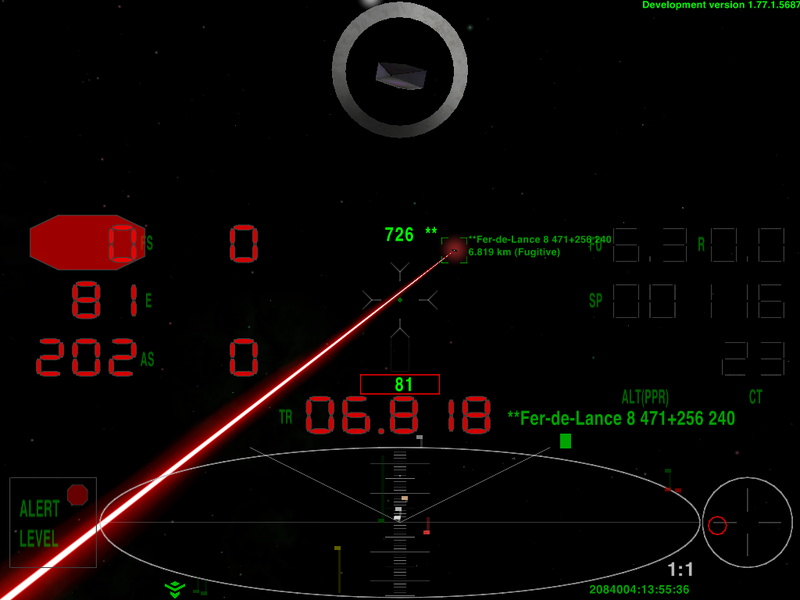 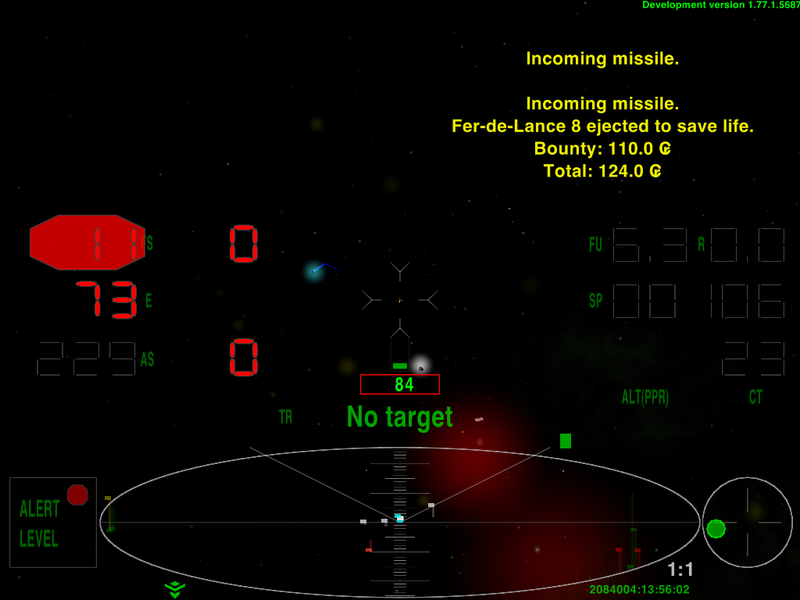 Depending on Oolite v1.77. Cabal Common Library OXP 1.7 needed if extended data allowed and you want to see Cabal Strength of the ships.

Unzip the file, and then move the folder named ".oxp" in the end to the AddOns directory of your Oolite installation.

If you set AllowExtendedData to true in the Script/detectors.js then also shown in order:

But this give too much informations so disabled by default.

You can set the position of the on-HUD displays to 4 predefined place: Top, Down, Above or Below crosshairs by set $Detectors_HUDPlayer and $Detectors_HUDTarget to "T", "D", "A" or "B". If you using NumericHUD v3.1 then suggested to change HUDPlayer to "B".

The Layout variable hold the number of the default layout of the data in the name of the target ship, you can change it when you choosed your most liked design.

If you leave the SaveLife setting on the default true then the NPCs will try to eject if has Escape Pod and the energy level dropped below a single Military Laser hit. But the smart enemy will launch a missile also if available before leave the ship.

If the SpeedToFront set to true then show the speed first then the energy and name if you hit the target (false by default).

This work is licensed under the Creative Commons Attribution-NonCommercial-ShareAlike License version 3.0 If you are re-using any piece of this OXP, please let me know by sending an e-mail to norbylite at gmail. Scanner sound source: http://soundbible.com/878-Martian-Scanner.html