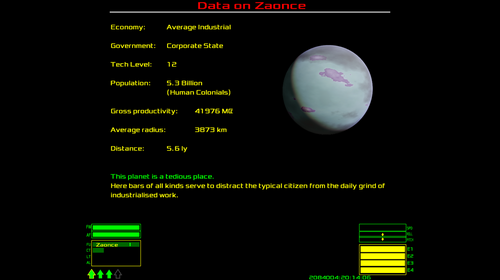 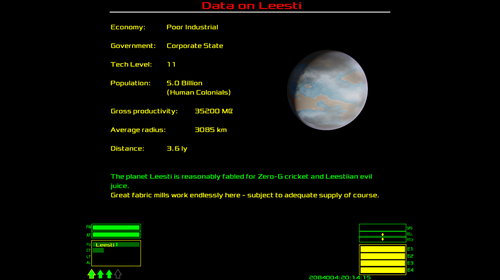 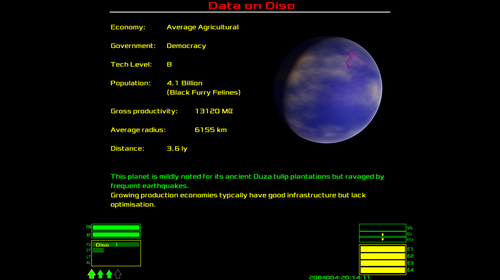 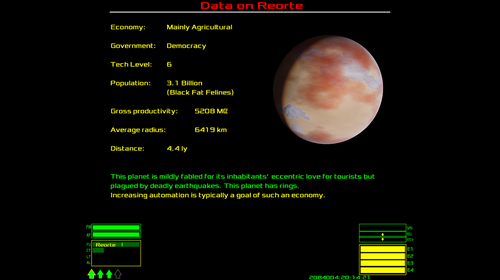 Paddling Pool has here changed Reorte from being a dictatorship

Rejigging the Trade model according to the Space Traders Flight Training Manual: Think about a planet's needs. Think what might make the society function. Don't trade expensive trivia to a hungry world

The basic idea is to keep the reliability of the standard trade model but not the monotony.

The Vanilla game model means that some items are always more profitable than others as long as you are trading in the right direction between the industrial & agricultural poles.

This model assigns each of the 8 economy types a specific high-demand commodity. Population, productivity and tech level also exert some influence.

For example: computers still cost more than machinery but when shipping to a mainly agricultural or poor agricultural system they will not be as profitable. The result is that at least sometimes the trader would now buy machinery in preference to computers.

Economy Type and Most Profitable Import

It is of course quite possible to argue over which commodity should go where and why but it's a simple matter to edit the oxp to one's own tastes (if you don't know how, just ask).

Further musings of the what, where, why variety can be found here.

Population, productivity and tech level also exert some influence, along with a dash of randomisation, but the above table should remain very reliable if not infallible.

To make a profit, ship an agricultural commodity to an industrial system or vice versa.

Some will make more money than others depending upon which economy type you ship them to. Generally speaking, the richer the economy, the more expensive its tastes and the more it will pay over the odds for them.

The other goods are either very cheap, legally controlled or available in smaller quantities than 1TC. Credits can be made shipping them here and there but that said, each of them is in particular demand by multi-gov, feudal and anarchy systems. The more insular or hazardous the system is the more it is likely to crave basic goods such as food and 'workers' or means of 'control' such as firearms.

So there are three (informal) 'levels' of trade, from the fairly ignorant to the savvy

Alien items are currently the 'odd commod' but will later either be integrated into either this oxp or into another that I'm working on.

This is my take on the basic trade model inherited from elite.

Disclaimer: I'm new to tinkering with markets and so my coding is likely clunky and sub-optimal, almost certainly with anti-social behavioural issues when it comes to integrating with other oxps. I hope to be able to address any such issues as they arise.

adjusted profit margins: generally less lucrative with the notable exception of...
new, additional trade demands for the more dangerous systems (hinted at in the f7 descriptions)
now incorporates every commodity bar one, for which I have other plans... moo hoo, moo ha ha... MOO HOO HOO HA HaHaHaaaa...