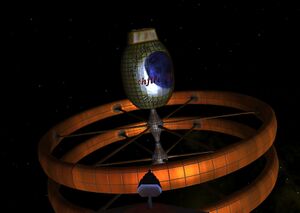 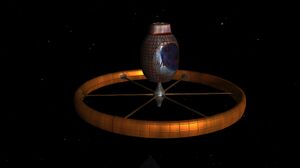 The Darkside Moonshine Distilleries are only found in a few systems in each galaxy, often clustered in poor agricultural regions such as the Tortuga Expanse in the far east of galaxy 1. They offer a highly desired commodity that is only available at DMD stations, Witchfire Whiskey. The price for Witchfire grows with the distance from production centers making cross galaxy runs very profitable.

Smaller Darkside Moonshine Saloons appear in random systems around the chart. Although Witchfire is unavailable for purchase in bulk from the Saloons, they offer an alternative docking facility for those who may wish to avoid the patrol.

This OXP does three things:

Stormrider wanted to make much more of this OXP. An unfinished bar interface for the Saloons can be found in Stormrider's collection (2014-7) Here!. He mentions widely that he is happy for people to take over his ideas as long as they credit him for what he did.

No other OXPs are required for this to run, however, the distilleries are clustered in areas that have been defined in a few other oxps, installing them may help provide ambience.