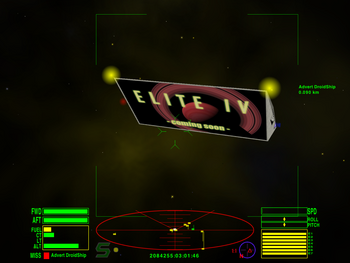 Perhaps when this billboard is floating in space in the year 3100, Elite 4 will only be 6 months away....

Elite 4 was for a long time little more substantial than a rumour. Frontier Developments have recently announced a Kickstarter project to fund Elite 4 - now titled "Elite: Dangerous". At this stage relatively little has been announced regarding features and gameplay, though more updates are expected. It is intended for release in early 2014. See the rumour mill page, or the Kickstarter project page, for more information.

Elite: Dangerous' Kickstarter made its funding target on the 2nd January 2010, with only 52 hours left. This game is no longer vapourware, it is going to be made!

This category currently contains no pages or media.