Difference between revisions of "Break" 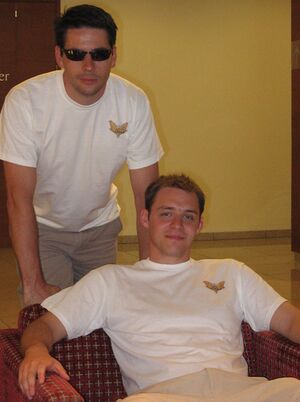 Commander Break is the online Elite avatar of Jason Togneri, creator of many fine works of fiction and of the slightly pathetic ArcElite trivia pages, Gold Edition. You may communicate with Commander Break via the EBBS, and he has been seen on the synIRC IRC network on channels #alt.fan.elite and #EliteNonsense as the user with nicks Break, filth, filecore, Sarine, necrophile, sandwich and, recently, cardboard.

Commander Break's current legal status is set to fugitive. His location, flight plan and remaining oxygen supply are all unknown; his bounty is to be set upon review of this file.

The last known and confirmed sighting of Commander Break on a station or planet was in Tianve in 3110, and the last recorded transmission of Commander Break was "Oh, fu-" in the region of Arazaes, in 3118. Currently the commander is rated as an Elite combateer, although he has no rank as yet in the encroaching orders of the Empire or the Federation. He currently owns no vessel.

Commander Break is declared missing and legally insolvent; additionally, he is a fugitive in seven systems. His criminal record declares him to be guilty of multiple charges of launching without clearance (throughout the Federation, the Empire and the Alliance), as well as seven counts of piracy and one count of destruction of a planetary ecosystem in the Independent systems.

Commander Break is a typical frontier mercenary/trader. According to government records, he is a hybrid human/furry blue feline who was born Thomas Carmody on a frontier moon called "Triffid" in 3086 to a young single mother. He was disliked in school and bullied often. One day he was expelled for dropping a one tonne cannister onto another child, having broken into a cargo handling depot. He escaped the local authorities and, five years later, had opportunity to 'acquire' an old Cobra Mk IIIC called the "Nocktress", which has since been repaired so many times that the colourful plastic seat is the only original component.

Like so many other pilots of his era having served in Thargoid conflicts - partly the cause of his Elite ranking - Commander Carmody was reported as Missing In Action in the vicinity of Arazaes in 3118 during a firefight with two Thargoid Warships. It is believed his hyperdrive malfunctioned and he misjumped, never to emerge. The name "Carmody" has not been heard on the spacelanes since.

His favourate quote is an extract from Jump Engines Today, published in 3117 in conjunction with the Galactic Cooperative Science Council: "Theories abound of witchspace 'time travel' due to misjumps caused by strange technologies, and a number of small time jumps are known to have occurred in the past. However a jump of the magnitude to propel the unfortunate Commander a sizeable distance into the future is not only unlikely, but quite clearly impossible."

Carmody is a coward and an opportunist. He prefers to stab in the back rather than risk being shot at. He deals in illegal wares, through choice, but not always for the profits. A rather dull man with a quirky sense of humour and a slightly sadistic streak, he tends toward alcoholism while piloting (hence the launching without clearance violations) and can be erratic when surrounded by crowds; however, he does have genuine talent for fighting and flying, which is actually surprisingly good.

However, the Commander tends to be impatient and short-tempered, and will more often than not switch sides and attempt to buy himself out of tricky situations. Unfortunately, having little capital to begin with, he often lands himself in worse situations, and currently has at least twenty-three individuals and organisations claiming reposession of his ship as payment.

His one saving grace was his action in the Thargoid Wars on behalf of the Elite Federation of Pilots, as the Commander can be a very skilled, if somewhat arrogant, pilot. He would not have survived so long otherwise.

None. Has basic rights to some scrap metal (remains of the "Nocktress") on McKenzie asteroid, near a small scientific observatory in Arazaes. This state of affairs will, however, continue for only as long as the emergency beacon remains active. Thereafter, it becomes legal scrap and open to galactic salvage rights.