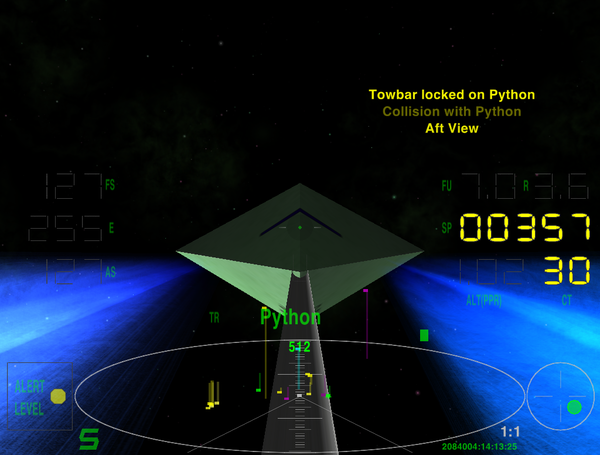 Pilots often eject when lost a fight and left behind an almost destroyed ship. You do not need to destroy ships anymore for bounty due to you will get instantly when the pilot ejects.

Your HUD can show the Derelict status of your target if Detectors OXP or NumericHUD v3.11 OXP installed or you insert the insertintohudlegends.plist file from the Towbar OXP into your hud.plist.

If you apporach a derelict ship in 100m (or hurtle into) with low speed difference (below 10) then the towbar will lock it, see in the aft view (F2).

You can tow ships with maximum 1.6 times more mass than your ship, others can be mined with Ship Miner only (see below).

Can not use Injectors without a special equipment and pitch rate very low when towing (the $TowbarSlowTurn variable in towbar.js can be set to false on computers where controls goes jerky when tow a ship).

Pull into a dock in the current system to sell the hull as a large amount of alloys. 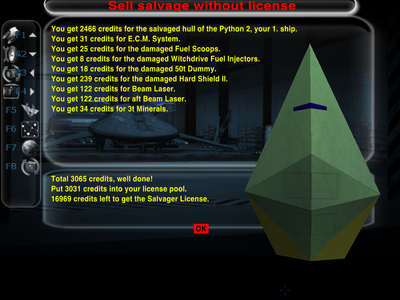 The payment calculated from the alloy price at the station where you sell it, plus 0-2t Computers depending on the ship size. Largest ships can give maximum 80t alloys only due to the inner space.

Alloys will not added to the market because the ship sold to a dealer who pay instantly but disassemble later (and to avoid fill up the 127t limit of the market), but cargo will be added. If the market is full with this cargo then the remains will be sold at half price or discarded if you set $TowbarLimit127t to true in towbar.js. 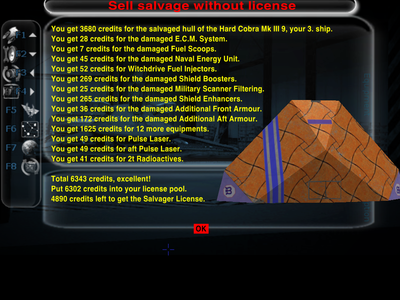 Reduce the pitch and yaw movements when towing due to there are a small but increasing chance to break the towbar or the towed ship, heavier ship break sooner. A few tips:

Do not go to a sightseeing tour: the status of the ship degrading over time when moving, so you can earn more credits if you deliver faster. You will be informed about flying parts to remember this. Losing less at low speeds but your haul are in safe only if your ship is stopped.

If the towbar is destroyed then you can buy another and go back to the ship, just find the "D" (derelict) beaconCode on your Advanced Space Compass. Telescope OXP show it also in the main scanner from any range.

If you are too slow then pirates will blow up the ship for the cargo, hunters for the bounty or Thargoids for sure.

Not all derelict ship in the system has beaconCode due to the signal transmitter placed when the towbar locked on.

You can change the towed ship if your ship touch another derelict ship.

You can release the towed ship by prime Towbar (Shift+N) and press activate (n). The just released ship can be relocked by another activate (within 200m).

Largest towed ships facing into your aft weapon so you can not fire backward or you will destroy it. If you must then release it by double "h" keypress (start and stop a hyperjump) and pick up later. Before this you must set a target system and has enough fuel for the jump.

Do not engange fight when towing a ship to avoid too many steering which break the towbar. If you must then release the towed ship and pick up after the battle.

Build up your reputation by salvaging more ships, missions will require qualification.

Reduce your Laser power if the targeted ship is derelict and weak to save it from exploding when forced to eject. Military Laser can destroy it but slower which give more time to stop your fire. Suggested to install the "Derelict" display into you HUD by either Detectors OXP, NumericHUD v3.11 or following the instructions in insertintohudlegends.plist file to can stop your fire in time.

Complex robots can transfer the valuable parts of the towed ship to your cargo store but this take some time.

Mining go ahead in the following order:

2. Computers: from the built-in electronics, usually 1 or 2t depending on the ship size.

3. Machinery: from mining equipments and lasers, in equal value.

4. Alloys: dismantle the hull into pieces but only the smaller ones can fit into the scoop (max. 10t).

Mining will stop by default when cargo transfer done assuming you want to tow the ship into a station.

To continue prime Towbar (Shift+N) and press mode (b), but this suggested only if you do not plan to tow the ship back to any dock.

Cargo check need some time in ships with 0t cargo also due to the cabin safe can contain valuables. Mining will be stopped in steering, speed changing, injecting and torus travel so processing when stopped or travel straight at constant normal speed.

Some ships are equipped with a self-destruct trap and a mistake during Fuel transfer can end up with a blast also. These can cause large damage to your ship depending on the size of the towed ship. After you gained more and more salvaging experience you can prevent these problems more and more times.

Finished mining counted as the ship is salvaged which increase your reputation, so you can save towing time if money is less important.

The "Empty" word in the ship name mean the cargo is transferred already, the "Mined" word mean finished mining. Your HUD can show these words also with NumericHUD v3.11 or by following the instructions in insertintohudlegends.plist. Derelict ships get light blue lollipop in the scanner when targeted, Empty get blue and Mined get dark blue.

If you want to sell the parts in other system then you must mine the ship before jump due to there is not possible to construct a tool which can avoid the explosion of a badly damaged ship in hyperspace.

You should mine also if you are very far away from any dock to avoid losing many parts on the long way, but if the Station is near then you can get more credits by towing.

Ship mining is not 100% safe, the towed ship can explode from the meddling in rare cases which surely destroy the miner.

Ship Miner can fit into large ships over 130t only and the mined parts need many cargo space, except if you found valuable cargo (Gold, Platina or Gem-stones).

Additional transporter bots can help to reduce mining time and increase safety. The possibilities of flying or destroying parts are about the half of the original. Also can catch large parts when towing before flying out from the towed ship.

Enable Injectors when towing a ship. Costly due to need stronger towbar holders and new exhaust tubes to the gases evade the towed ship.

The towed ship losing more parts if the speed is higher so you can earn the same money only but can save time. Torus Drive is the only exception from the speed rule so suggested to use as soon as possible. Do not steer your ship when injecting otherwise towbar will be unstable more times faster.

Can fix a broken towbar, but one time only. Repair will start automatically when needed and take about a minute.

Can not repair a destroyed towbar which can happen almost as often as break so better if always apply Towbar Stabilizer and start repair in the last resort only.

Use when towbar being unstable to prevent damages and the possible explosion of the towed ship. Occupy an empty pylon, launch as a mine. Buy more if you plan to tow heavy ships for long range.

Can not fix a broken or destroyed towbar, nor resurrect the towed ship after an explosion caused by the unstable towing, so use before these problems occurs. 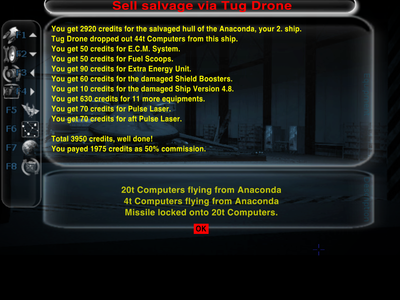 Launch as a fire and forget missile to a derelict ship and you are done with the work. Guided by the local authorities which charge 50% commission but pay instantly when hit the target.

Will drop out the cargo and pay for the ship only so you must scoop if not transported with Ship Miner before launched the Tug Drone. GalCop defend Tugs but need to known by all pirates that Tugs never transport cargo to reach a tolerable safety level (is not worth to attack it).

Deep Space Dredger OXP provide Salvage Missile which can autopilot a derelict ship with cargo. In this case you must escort it until reach a Dredger which is much harder because pirate ambushes, but can pay more due to avoid commission.

Tug Drone can fit into large ships only (over 130t). Do not target small ships which pay less than the cost of the Tug Drone. You must aim exactly to the target (with red box) to launch the drone, green target lock is not enough.

The rotating ship model cannot be displayed in the sell salvage screen during flight, and your ship is moving while you read it so press enter shortly to reduce the blind fly time. 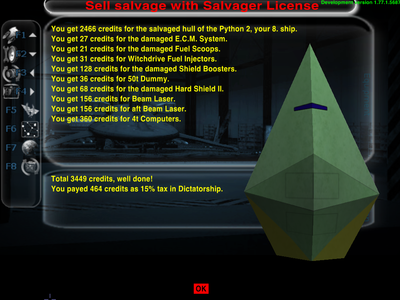 GalCop regulate ship salvaging at main stations: you must buy a license from your first incomes (deducted automatically). You can get payments for the cargo only before you pooled the full 20000 credits for the yearly license.

After you got the Salvager License you must pay tax from the ship hull and equipments based on the government.

Other places than the the main station works without licensing but charges 50% commission. Dredgers in Deep Space Dredger OXP and Salvage Gang in Anarchies OXP buy without commission due to processing the ship locally but pay low price for the alloys of the hull.

Cargo never taxed nor commissioned. You must buy new license in every year.

Your reputation counted as how many ships salveged either by delivered or fully mined it. When you reached certain levels you can get Salvager Missions:

You can step up in your Salvager career by towing or mining derelict ships or achieve salvage missions.

As your reputation increasing you can get better rankings which shown in the Manifest screen (F5-F5).

If you are re-using any piece of this OXP, please let me know by sending an e-mail to norbylite at gmail.