Difference between revisions of "The Assassins Guild OXP"

At such gatherings, stories are swapped of a sinister organization known as "The Assassins Guild". This semi-mythical association is said to operate in Galaxy 7. A killer who can secure membership of "The Brotherhood" can expect huge rewards, and the most unpleasant consequences for failure.

No self-respecting "laser for hire" should miss an opportunity to impress "The Guildmaster". Be warned, dealing with the powers that exist in this troubled Galaxy may have dangerous consequences! Background information regarding a few of the ships added by the OXP and some intelligence on the powers that inhabit Galaxy 7 can be found on the Powers and Organisations page.

Version 1.3 of Assassins will run correctly on Oolite 1.69.1 onwards. It will still run on Oolite 1.65. This update fixes the "mission briefing screen clash bug" (using the cunning method devised by Commander Eric Walch) and so is compatible with all other mission OXPs. If you have Thargoid Wars or Military OXP installed, make sure you are using the latest version (downloadable from this Wiki) as the old versions of these OXPs can clash with Assassins (and vice versa). Clicking the links for Thargoid Wars or Military will take you to a wiki page where you can download the latest versions of these OXPs.

"Easy to Iron Ass". The missions offered by the OXP rise in difficulty depending on both your Elite rating and your standing with the Guild.

The first few missions you will be offered are fairly easy, but as you move up the Guild’s rankings the missions get tougher. The final series of missions are very tough.

It is assumed that you are using your blood money to equip your ship as suits a professional killer. You'll need more than an Adder with a pulse laser to take out most of your victims! As the money offered for a hit increases, so does the danger posed to the would be 'Cleaner'. Some of the mission ships featuring in this OXP are very well armed, but you won't encounter these until you have more than 900 kills and hold a Guild Ranking of at least a "Cut-throat". The difficulty curve for the missions is faily steady and you can complete all missions in a well equiped Cobra Mk III.

The OXP adds: 21 Missions (including 2 secret missions), over 30 new NPC ships, 3 new player ships, 6 new weapons (1 can be used by the player), a new item of Player equipment, extra stations (some stations can be destroyed, one can be explored on foot whilst docked), new hails, new AIs, an Assassins Guild Ranking, changing Systems data (player and NPC actions change the Universe!) and over 50 Mission Briefing Screens.

Galaxy 7 is rewritten to add numerous features including individual characters, interacting NPC powers, 15 systems are controlled by NPC powers, detailed system descriptions, new stations, new scripted ships appearing at the modified systems, 10 systems gain moons, extra planets and gas giants & a Galaxy 7 News Service helps keep the player up to date with Galactic events. All the missions and features added by the OXP only affect Galaxy 7. The player ships added by the OXP may however appear for sale in any Galaxy. 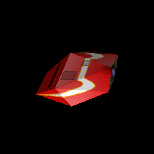 Due to the size of the project (and the number of Ooliters working on different bits of it), Assassins was in Beta for some time. This version should be bug-free. A full readme is included, which you should read before playing. Saved games work on all versions of Assassins. Version 1.0 completely rewrote the “Civil War” missions (and added 5 new missions in the process). Versions 1.1 and 1.2 had a few bug fixes (set out in the readme). Version 1.3 has a code patch added to stop mission conflicts and also has some changes to ensure the OXP works properly on Oolite 1.69.1. Simply install this version of Assassins in your AddOns folder (overwriting the old version). If you are playing on Oolite 1.69.1 onwards, the first time you load up Oolite after installing you must hold down the SHIFT key (keep it held down until you see the rotating Cobra Mk III on the start screen). This ensures that the cache is updated.

If you started playing a Beta version of Assassins (below V 1.0), have you seen a news broadcast mentioning “Heretic Shipyards”? If you have not, then there is no need to do anything other than install this version. If you have, then you will need to edit your save file to reset the OXP to this point. The readme gives instructions on how to do this. You only have to change two numbers! 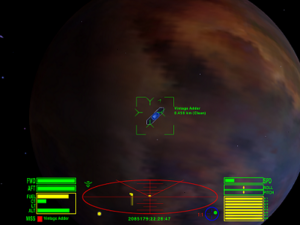 A law-abiding rodent scientist is targeted for termination.

To play the OXP, unzip the download file. This will create a folder "AssassinsV1_3". Open this folder and you will see a folder named "Assassins.oxp" and a readme. Move the Assassins.oxp folder to Oolite's AddOns folder. Do read the player's section of the readme before you play!

The first event will happen when you are docked at any main station in Galaxy 7 and have more than 200 kills. No Assassins mission or event can trigger without the player having a particular kill count. This is done to make the OXP playable by any Commander. If you are a noob with a weedy ship, you won't be asked (yet) to take on an army of nasties. You'll just be asked to take some of the easy hits until you have an Iron Ass. If you are an old-hand then the more difficult missions will come up quickly, although you still need to do the easy hits first in order to build up your status with the Guild.

A Triad Wasp Mk I.

The kill count requirement for Assassins missions is spaced roughly every 200 - 300 kills from 200 onwards. If you installed with 3,000+ kills, you would meet the kill count for all events. Once kill count is met, a new event will happen once a certain amount of time has passed (measured in the number of hyperspace jumps made since the last event), provided you completed the previous mission. Missions are only offered whilst you remain in Galaxy 7.

When the name "Agent Wombat" means something to you, you will have seen everything the OXP does. Once the OXP is installed in AddOns, the new ships, stations, planets and powers are added to Galaxy 7. Hang out in Galaxy 7, going about your ordinary Oolite business, and things will start happening to you...

Side effects from other OXPs

The orbits.oxp seems to remove or modify the position of a planet from the system of your first mission, making your target very hard to find. See this post for background info (spoiler alert).

After you finished the original set of missions, Victim 11 adds an additional target.