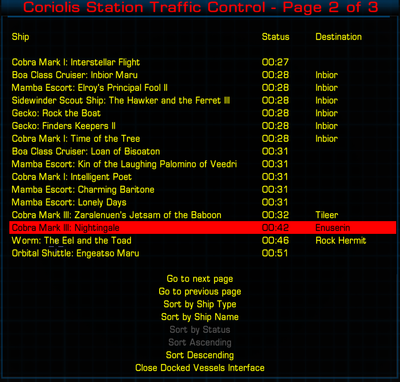 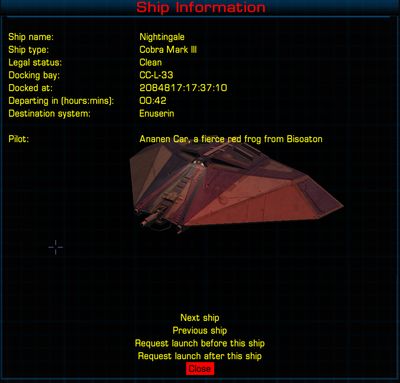 This OXP attempts to add some realism and depth to the game by giving each station with NPC traffic its own list of docked ships that launch when their scheduled departure time lapses. It does this in the following ways.

Hopefully, the things this OXP does do contribute to a much richer experience for Oolite players.

What's happening under the surface

The main change this OXP makes to the core game is to adjust the core populator function. For ships jumping into the system from somewhere else, there is no change. That should still happen using the existing logic. What has changed is the outbound functions, and it's worth taking a moment to explain the logic that this OXP uses. Previously, the standard populator would randomly launch ships of various types, but some of that randomness was mitigated by some balancing functions. That is, if there was more than a certain number of ships with a particular role, no more of that role would be created. What that did was prevent a system from having more than 3 heavy hunter groups, or 4 medium pirate freighter groups. If there are 3 or more heavy hunter groups, the populator wouldn't create anything.

In this OXP, some of that balancing is gone, because all of the ships in the docking queues are defined in advance. For ships coming into the system the balancing factor is still present, but for ships launching at a station there could very well be 5 heavy hunter groups.

Note: **Any OXP that changes the core Oolite populator function may potentially conflict with this OXP.** If you find an OXP that does conflict please contact the me via the Oolite bulletin board so I can work out the best approach for addressing the conflict.

When the player is docked at a station that has NPC traffic and allows the list to be shown, an item called "Station Traffic Control" will be available on the Interfaces (F4) page. The title of this will vary, based on the name of the station. For instance, at a main Coriolis station, the title will be "Coriolis Station Traffic Control".

On opening the traffic control screen, a list of ships will be displayed. Beside each ship will be a scheduled departure time or current dock status (see below), and, if the ship has lodged a flight plan, what their destination system is. This list will refresh itself periodically, even while you're viewing it.

If you select a ship from the list a "Ship Information" page will be displayed. This page will outline some of the information the station has about the vessel, including the name, legal status, and whether the ship is part of a group or escort. Also, pilot information will be available, including their home system and species.

Please note that data on the list is subject to change. Ship captains can change their minds about when they want to leave, or what their destination will be.

Ship captains tend to keep destination information to themselves, unless there is some benefit to sharing the information, and they will only share the information with pilots who have a reputation they can trust. If a captain has determined to trust the player their destination will be visible in the dock list and they will permit the player to launch before or after their ships, in essence offering a token group membership to the player. When a pilot has permitted this, the options "Launch before this ship" and "Launch after this ship" will be visible in the menu. The availability of these options will be based on the reputation of the player, and the relative danger of the destination system. If the player has a reputation as a pirate hunter, then traders and couriers might value the player's presence. But if the player has the reputation of a pirate or assassin, traders are likely to be wary of the player.

You can't launch before or after any ship that is due to launch in less than 10 minutes. Station launch protocols require a minimum of 10 minutes lead time for a launch.

Occasionally, when you open the Traffic Control display, you will see this: "Establishing communications link with station traffic control. Please stand by." This message indicates that the station's data network is experiencing bandwidth issues. The list will appear after a short delay.

Note: While the above vessels are not included on the dock list, they will still show up as "Inbound" when they are docking with the station. This is purely for information purposes. Once they enter the station they are controlled by other dockyard services and will not be displayed on the list. 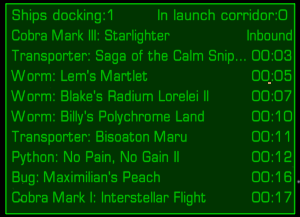 GalCop stations also provide a data stream that can be accessed through a multi-function display (MFD). To access this data stream, first target the station, then select a MFD slot using the Shift ":" keyboard sequence, and then cycle through the available MFD's using the ";" key until the Traffic Control list appears:

The MFD is a "lite" version of the main Traffic Control screen. It shows, at the top, the number of ships attempting to dock at the station, and the number of ships that are currently in the launch queue. Then the first nine entries from the traffic control list will be displayed.

Note: There is a difference between "Launching" and being in the launch corridor. A ship that is launching is still inside the station in their allocated docking bay. Ships in the launch queue are being launched by the station traffic controller and should be exiting the docking port shortly.

In some Anarchy, Feudal and Multi-Government systems where the tech level is greater than or equal to 9, if you can find a Rock Hermit (Salvage Gangs and Hack Outposts are also possibilities if those OXPs are installed) you might be able to purchase an "SDC Hack Chip". The hack chip bypasses the security protocols of the main station's dock list, giving you complete visibility of all ships destinations. When you view the details for a ship with the hack chip installed, you will have an additional option: "Override launch authority". Selecting this option will give you the ability to launch before or after that ship.

Using the hack chip is risky, though. GalCop takes a dim view of security breaches, and if they catch you using it, be prepared for serious repercussions. GalCop monitor their networks carefully, and using a chip like this cannot go hidden for long. It may take only a few seconds for GalCop to trace the security breach to your ship.

Several methods are available to help third party OXP's add ships to a dock, and then be informed of events that take place to those ships. Please see the separate document "developer notes.txt" inside the pack for all information about adding ships and monitoring status.


Special thanks go to:
cim, for all his coding help and patience with my incessant list of questions. I couldn't have done this without your help, cim!
Anonymissimus, Norby, Disembodied, another_commander, Wildeblood, Day, NorthenderPNE, and all other forum members who have sent me their suggestions and feedback, without whom this OXP would not have been anywhere near as good as it could be.
To all the devs of Oolite, who are committed to making Oolite such a great base from which experiments like this can be launched.